Published 11/24/2020, 12:26 AM EST
Despite having a roster that led them to their 17th Championship title, the Los Angeles Lakers have been one of the most active teams this offseason. With veteran players like Rajon Rondo and Dwight Howard parting ways with them, they had to make additions to their team. Montrezl Harrell and Dennis Schroder are two of these. The Lakers also decided to re-sign Markieff Morris, and it looks like LeBron James is happy to have his teammate back.

Morris spent a little time in the free-agency field before the Lakers looked at all their options for an upgrade and then signed Morris again.

Morris had joined the Lakers in February and could earn a place in the regular rotation quite rapidly. He has proven to be valuable on the defensive end and is a good three-point shooter. However, he has struggled to find his rhythm on the offensive end. This is because it already comprises big men like LeBron James and Anthony Davis.
What his new role is going to be, is yet to be seen. But with Montrezl Harrell on board, Morris’ playing time might get cut short quite a bit. But now, with Morris, the Lakers could have one of the deepest benches in the league.

LeBron James and Magic Johnson thrilled to have him on board

With hopes to win another title consecutively, LBJ showed his excitement to have Morris back on his Instagram handle. He gave a shout out to Morris for choosing to remain with the defending champions by posting his picture and wrote, “YESSIR!!!! MY DOG. LET’S GET IT AGAIN MY G!!”. 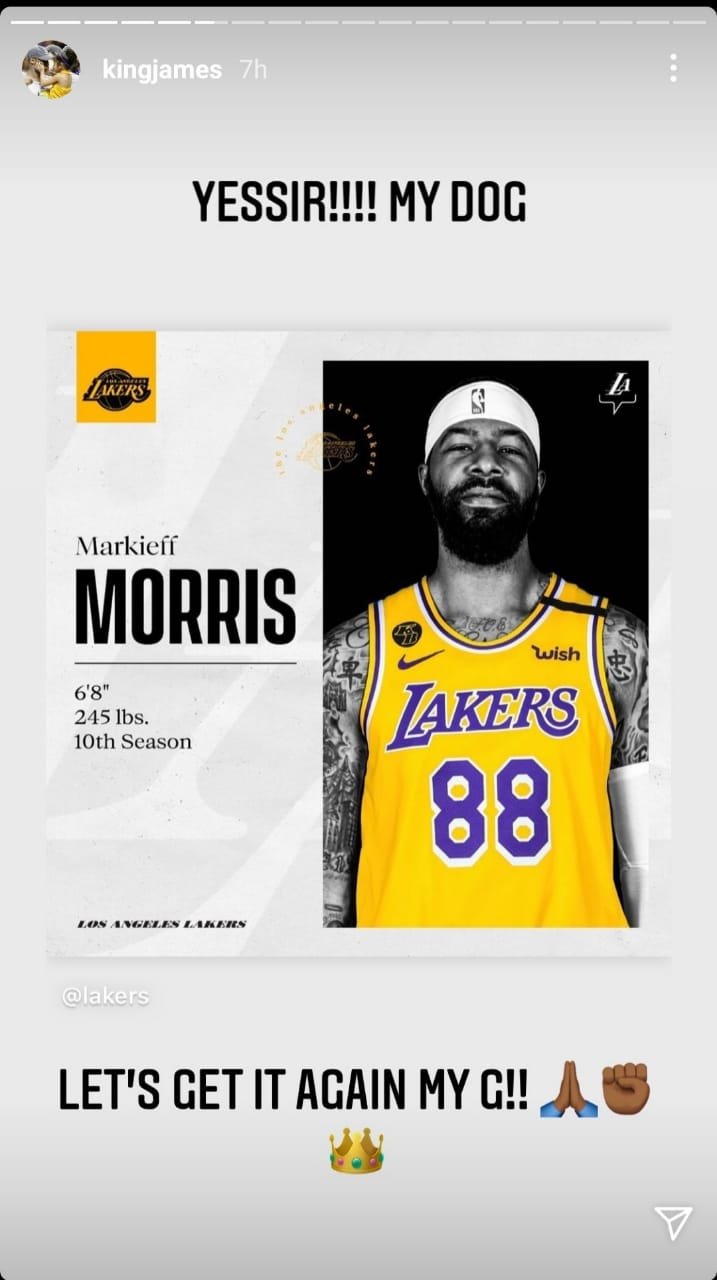 Lakers legend, Magic Johnson also showed his satisfaction with this deal. He posted on Twitter, “I’m so glad the @Lakers resigned Markieff Morris because he shot 42% from the 3-point line during the playoffs opening up the floor for the Lakers two superstars LeBron and AD!”

I’m so glad the @Lakers resigned Markieff Morris because he shot 42% from the 3-point line during the playoffs opening up the floor for the Lakers two superstars LeBron and AD!

The veteran’s presence is crucial for the Lakers for their chance at another title. Will this roster shakeup make the Lakers a stronger contender for the championship? Or should they have stuck with the same players who got them the title last season as much as possible?

More from EssentiallySports on Basketball