SypherPK Theorizes Why Fortnite Is Missing The Element Of Fun

On Monday, the Los Angeles Clippers released a powerful video on their social media. Titled, “While We Were Away”, the video talks about the last few months of the lockdown. Paul George beautifully narrates the whole situation from the start of coronavirus pandemic to the protests in the country right now.

The video starts with the message “Basketball is the greatest game in the world, but it cannot ease our pain nor heal our wounds,” shown on the screen. Then George starts talking about how the virus affected us, and has thrown our daily lives off gear. He then gives credit to all the doctors, nurses, grocery store workers, and delivery workers, calling them “Our All-Stars.”

The second half has the most iconic lines of the video. “George Floyd, Breonna Taylor, and Ahmaud Arbery were murdered. Cause of death: another, more familiar virus, centuries old.”

These are just three of the recently known names among the innumerable victims of racism and injustice in the country. “The names and dates change. The national cycle of racial injustice and police brutality do not.” So many other names fail to hit the major media organizations. They just turn into page after page on victims of injustice.

The video ends with George saying, “Basketball offers no vaccine, no cure. Only an example. Of teamwork. Of togetherness,” and it shows the Clippers court with lights on again. Signaling the return of the NBA, it shows Kawhi Leonard hitting the hardwood. 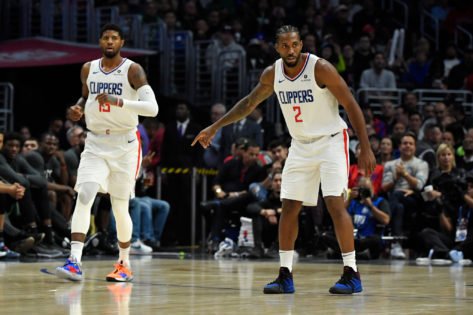 A week ago, George posted a video on his Instagram account with a caption titled “Stay strong” and gave his opinion on the current situation. The video was a compilation of law enforcement in the country going wild against the citizens. George wrote, “I have family members in law enforcement so I know there are some good cops. That being said I won’t say f**k the police but what I will say is f**k the system!”

As the NBA season resumes on 31st July, fans are eager to the Klaw and PG13 in the Playoffs together. While George got a bad rap for his performances since the “playoff P” statement, Kawhi has just come off a title-winning season. Together, they’re one of the best two-way combos in the league and are rightfully one of the top contenders.