Los Angeles Lakers forward Jared Dudley may not be one of the best players in the league. He wasn’t before this and he certainly isn’t now. He is a veteran that is a strong locker-room presence and can give you about 10 minutes a night. His peak in the sport is far from over. He may not even be in the league for much longer either. Dudley is uniquely self-aware about his current standing as an athlete, as seen in a twitter exchange with former NBA guard Baron Davis.

Davis tweeted a video of Michael Jordan playing basketball recently. Jordan hit his trademark fadeaway and told his opponent to go see who Michael Jordan was on YouTube. Davis captioned the tweet “MJ can still play in the league. He Just as quick as Jared Dudley right now”. Dudley was quick to respond with “Man!!!! He quicker But they be goin 1-1 at his head every play!!”

MJ can still play in the league. He Just as quick as Jared Dudley right now 😂😂 https://t.co/3crj56qYkI

Los Angeles Lakers with Dudley in the bubble 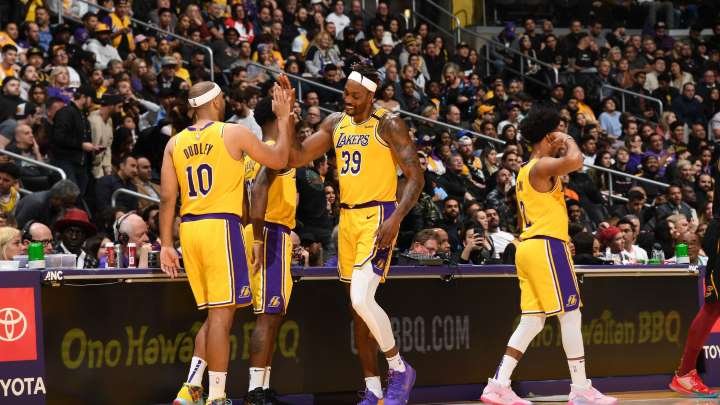 Dudley is a part of the Lakers’ large list of forwards and big. He is competing for spots with Markieff Morris, Devontae Cacok, Kostas Antetokounmpo, Kyle Kuzma, Anthony Davis, and occasionally, J.R. Smith and Dion Waiters. Dudley is as close to being surplus to requirements on the court as any player on the fringes of a bubble team. However, his value is estimated by his impact on the younger players. Dudley is known to be a great locker-room guy, helping the young Brooklyn Nets coalesce for a playoff run last season.

This season, his impact is obviously muted by having veterans like LeBron James, Dwight Howard, Anthony Davis, and Rajon Rondo on the squad. Nonetheless, Bradley has had a profound impact on Kyle Kuzma‘s progression, and dedicated time to help the youngsters get better. Bradley has averaged just about two points in his 40 games this season. He averages about 8 minutes on the floor. This impact is probably going to reduce further in the playoffs, as teams play their best lineups longer in that situation.

50-year-old Michael Jordan might as well be in the league in a Dudley role, but he is too busy owning the Charlotte Hornets.