Michael Jordan and Kobe Bryant shared a very strong bond. Kobe emerged in the league as MJ was making his way out. Kobe admired Jordan and modeled his game after him. Imitation is the sincerest form of flattery, and Jordan took a liking to Kobe ever since they first faced each other in the all-star game.

Actor John Cusack shared a wonderful story with Jimmy Kimmel, explaining the infamous picture of Kobe helping Jordan up and both men laughing. That was a picture from the final time Kobe and MJ faced each other during MJ’s final season with the Washington Wizards.

“In that game, at some point, everyone knew Michael and Kobe were going to go one-on-one. So Kobe got the ball, cleared everybody out, so everybody started to wrestle up with anticipation. It was going to be Kobe against Michael. Kobe started to drive and Michael stepped right in front of me and took the charge and went down. Kobe stood over and Michael said, ‘everybody in the f*cking building knew you weren’t gonna pass’. The old pro got him and Kobe just started laughing.” 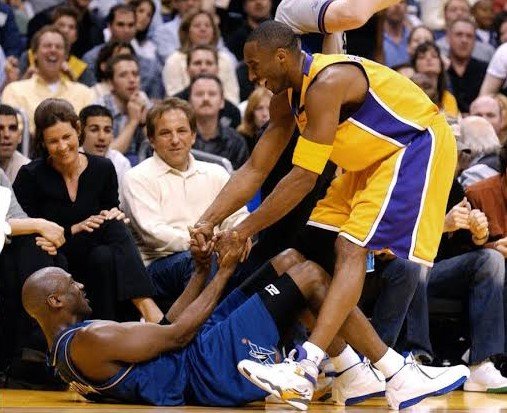 Michael Jordan and Kobe Bryant had formed a big brother-younger brother relationship. Jordan was Kobe’s idol, and you could see how much Kobe built his game around being Jordan-esque. Both of them were similar builds, both physically and mentally. While Jordan got to 6 finals and won every single one, Kobe went to 7 and has a 5-2 record.

Jordan has gone on record saying that he feels Kobe Bryant was the only player that could beat him one-on-one. The bond that the pair shared was evident when MJ spoke after the untimely passing of Bryant. Jordan teared up while talking about Kobe, showing that there was a genuine bond of brothers between the pair.

Everyone cleared out – so Kobe could have MJ one on one -MJ took the charge / won the battle – they paused a beat , looking at each other wryly –
“ well the whole fucking building knew you weren’t gonna pass “mj said and they both burst out laughing ..:) pic.twitter.com/pqdRdk8KxP

Though Kobe has left us, Jordan is still here. We can always take the time to appreciate their basketball prowess, both individual and collective. Both men played with aggression every night and inspired millions to play the game. Whether one yells Kobe or Jordan when they take a shot, they remember the two greatest shooting guards of all-time.

“A Nightmare”: NBA Legend Isiah Thomas Reveals the Hardships of Coaching Against Kobe Bryant and Lakers