The Cleveland Cavaliers had a fairytale run in 2016. Their quest to win their first NBA championship in franchise history became reality. Emotions poured in excess as the city of Cleveland won its first major sports title since 1964. The man who made it all possible? A kid who grew up in the state of Ohio, aspiring to make it to the NBA. LeBron James came back to Cleveland after winning two titles with Miami, vowing his hometown fans that he would put the city on the NBA history books.

The Cavs had a deep and talented roster, and stood firm on the top of the Western Conference table. Going into the playoffs, the team enjoyed a perfect run in the first two rounds. They met the Toronto Raptors who fought back valiantly, but fell to the brilliance of James and co.

The team booked their finals berth, which was a repeat of the previous year. LeBron made history by making his sixth straight finals appearance. They were once again set to face the Golden State Warriors, who were coming on the back of a record-setting year. The Warriors went 73-9 in the regular season and many deemed the Finals fixture to be a mismatch owing to form the Bay team were in.

The Cavs started off poorly and suffered a 0-2 defeat early on in the series. They bounced back in the next fixture, but Steph Curry and the Warriors gained back momentum by posting a victory in Game 4 on the road at the Quicken Loans Arena in Cleveland. The Cavs were under utmost pressure before Game 5, as it was a must-win. The risk of losing the series was before their eyes and the whole state of Ohio anticipated a victory.

Game 5 of the 2016 Finals is one to be remembered as a classic, not because it was a high-scoring game or a nail-biter. It was a game on the road for the Cavs, which put an extra weight on their heads. The dream almost crashed in front of them.

No team had come back from a 1-3 deficit to lift the championship. It takes a massive amount of determination and a never-ending hunger to win, in order to gain the confidence that will fuel your game. That is exactly what LeBron James and the dazzling Kyrie Irving displayed at the Oracle Arena on June 13, 2016, which is exactly four years ago. 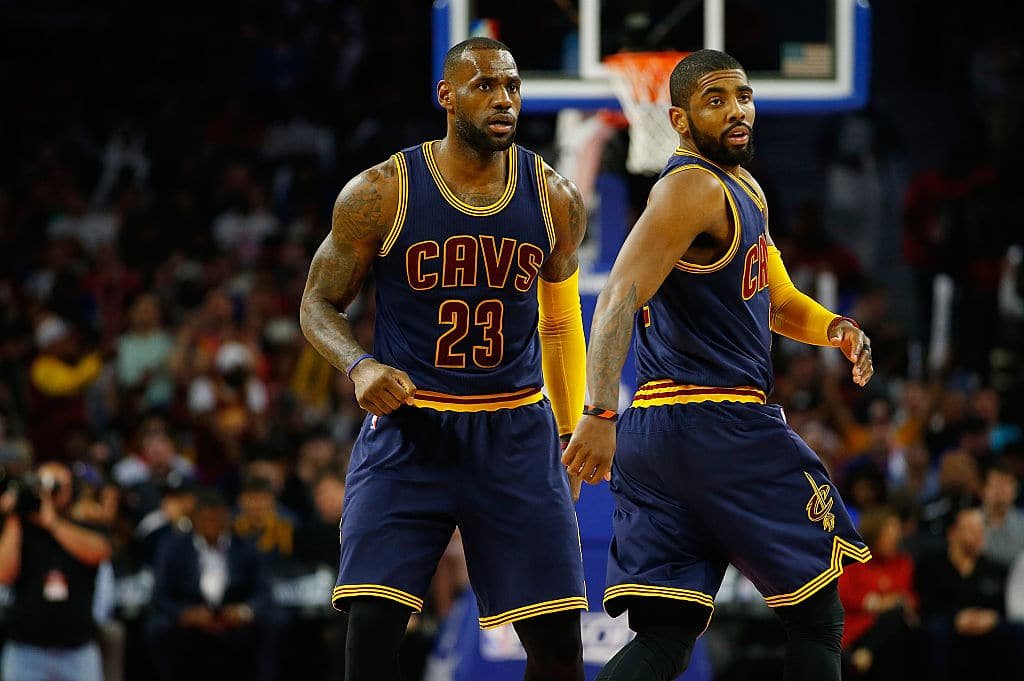 The destructive duo took control of the game as soon as the tip-off. They had no time to waste and it was all about winning the tie. The Cavs began laying the foundation for one of the greatest comebacks in sporting history by registering a win against the Warriors in Game 5.

When LeBron James and Kyrie Irving bossed the Warriors, etching their name in history books

Great athletes don’t crack under pressure. In fact, they step up when the weight of the matter totally dominates their mind. Kyrie and LeBron put up a magnificent performance on the day of Game 5, which is still the best performance by a pair in NBA Finals history. It has been four years since their historic victory, but the memory still remains fresh.

The duo created history by becoming the first pair of teammates to each score 40 or more points in a single game in the finals. Yes, you read that right. Kyrie and Bron each put up 40 to propel the Cavs one step further in attaining nirvana. To be precise, Kyrie Irving’s box score was 41 points, 3 rebounds, 6 assists, and 2 steals. He was incredibly successful as he shot 71% from the field.

King James on the other hand, matched Kyrie’s 41 point tally, got a massive 16 rebounds, 7 assists, and 3 valuable blocks. Shooting 53% from the field, one can enjoy their game as Complex Sports posted a throwback highlights of Kyrie and LeBron making history.

4 years ago today, down 3-1 Kyrie and LeBron put up the greatest duo performance in Finals history.

It has been four long years since this epic match took place. Not only did the Cavs enjoy victory, they massively disrupted the Warriors’ rhythm. Powered by Curry and Klay Thompson, they had established themselves as the clear-cut favorites, until they were overthrown by LeBron James and Kyrie Irving. An unforgettable night turned out to be even sweeter just a few days later as Cleveland won the championship and LeBron succeeded in keeping his promise.