The Milwaukee Bucks, despite having a great regular-season run, is facing an early exit from the NBA Playoffs 2020. Nothing seems to be working for the #1 Eastern Conference seed. Giannis Antetokounmpo’s bid to win an NBA title with the Bucks now seems a far-fetched dream.

Game 3 was crucial in all the certainty, but things began on a scary note for the Bucks. Just five minutes into the play, Giannis hurt his right ankle, and it looked bad. The Bucks were 15-11 ahead at that moment, but their best guy was injured. Giannis continued to play, but he did not project the reflection of the Greek Freak as we know him.

The Bucks have listed Giannis Antetokounmpo as questionable

They listed the star forward as questionable to play Game 4 because of the ankle sprain. In the match against the Heat, it was evident after that show of injury that Giannis was having some troubles with his ankle. Although he was cleared by the medical staff to continue playing. But something was definitely wrong, as this tweet also suggests-

Milwaukee Bucks star Giannis Antetokounmpo says his ankle wasn’t bothering him during the game, but he walked out of the arena severely limping.

In Game 3, Giannis (who struggled in the first half) had 21 points, 16 rebounds, and 9 assists to his name in 35 minutes of play. Later, in the post-game interview, he mentioned how he could have played for more minutes and perhaps saved his side in the final quarter. The Bucks were 87-73 ahead at one point, but lost their control over the match after that. They missed some layups, and it was only Jimmy Butler who single-handedly outshined the entire Bucks.

No Greek Freak = No win for Milwaukee Bucks?

The onus of win has always been centered around Giannis, and that is a given with the Bucks. Even in the last season, when they were title favorites but eventually lost the conference finals to Toronto Raptors, it was Giannis who carried the team on his shoulders. He averaged 25.5 points, 12.2 rebounds, 4.9 assists, 1.2 steals, and 2.0 blocks last season. 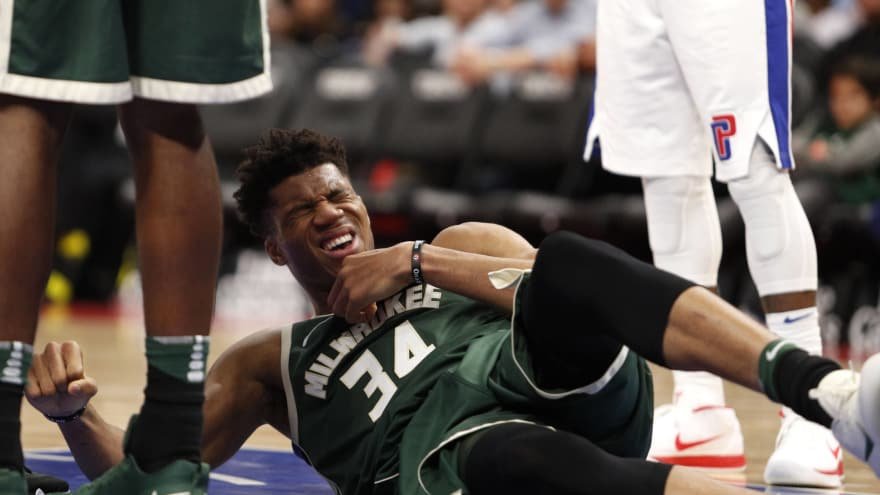 The reigning MVP and the top contender for again winning the title in 2020, Giannis also became the fastest player in the NBA playoffs history to reach 1000 career points, 400 rebs, and 200 assists after Game 3. This record is living proof of his value to the Bucks. Without him, their defense will take a toss and the chances will be high that the Heat whitewash the Bucks 4-0.

Center Brook Lopez and forward Khris Middleton are also having a great season. But the Bucks organization has developed the team around Giannis, and without him, the core gets weak. Let’s see if he will play for fewer minutes or not play at all.