The first-round series between the Houston Rockets and OKC has gone to Game 7! A resilient performance from the Thunder has forced the series to stretch to a decider. The Rockets had a chance to seal the series in Game 6, but missed out on the opportunity in the dying seconds. This brings up a question. How good are Russell Westbrook and James Harden when it comes to delivering in the final minute in the playoffs?

This is now irking our minds because Westbrook gave away a crucial turnover with just 7 seconds remaining in the game. OKC had a two-point lead, and a bucket could have given the Rockets in the game. However, things didn’t go their way, and Chris Paul the final blow to seal Game 6 for OKC.

After all this drama happened, a surprising stat came up from Basketball-Reference. While OKC gets all the credit for stepping up during clutch moments, it is quite the opposite for the Rockets. Their two-best players Harden and Westbrook are not efficient in the last minute of playoff games. 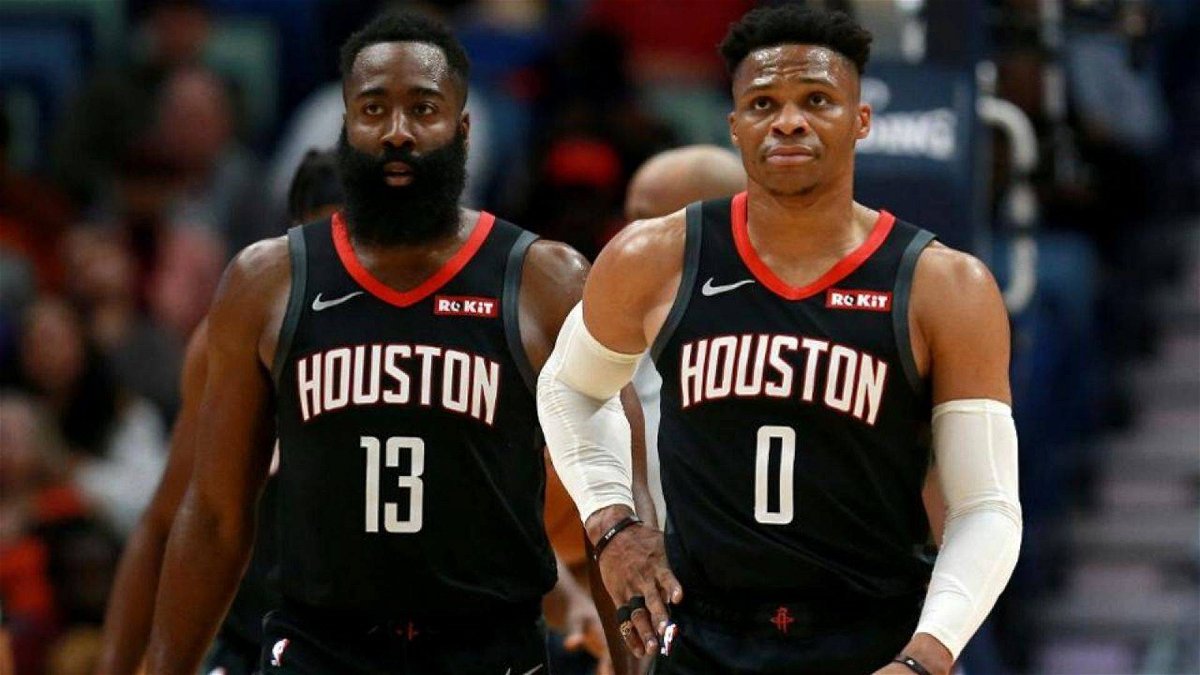 In playoff games where their team needs a bucket to tie or go-ahead in the final minute, these two aren’t quite effective. Russell Westbrook and James Harden have a combined field-goal record of 5-41 in these situations.

Since 1997, Westbrook and Harden have the worst FG% in the final minute of playoff games where their team needs a bucket to tie or jump ahead of their opponents. While this might seem to be an advanced metric, stats like these reflect how players step up when it matters the most.

On potential tying or go-ahead FGAs in the last minute of a playoff game, James Harden and Russell Westbrook are a combined 5-41. They have the two worst FG% in that situation (min. 15 FGAs) since 1997, the first year we have play-by-play data to calculate it. pic.twitter.com/NJGkVQk36c

Russell Westbrook’s turnover in the final seconds proved to be costly for the Rockets, who now have to win one more game to advance to the next round. The ball is now on CP3’s court, to come out and deliver with OKC again. The Rockets will be under pressure in Game 7, and we’ll once again get to see how Brodie and The Beard perform in clutch situations.

The Rockets and the Thunder played a very tight Game 6. The two teams exchanged buckets back and forth in a game where the biggest lead was only nine points for either team. The defining moment of the game proved to be Chris Paul’s heroics in the second half.

CP3 scored 22.0 points in the second half, to clinch the victory from the Rockets. Besides, Paul’s brilliance, Westbrook’s turnover in the dying seconds changed the game completely. What looked like an inevitable Rockets bucket, quickly changed into a Thunder possession.

Russell Westbrook’s turnover might have lead us to a Game 7. pic.twitter.com/bxxZwl45Ob

Following the loss, James Harden did not hit back at his teammate for the giveaway. Instead, he defended Westbrook for his actions. “That play was for Russ (Westbrook) to attack the basket. He attacked the basket, and he made the decision he felt was open,” Harden said.

Rockets’ James Harden on Russell Westbrook’s critical late turnover in Game 6 loss to Thunder: “That play was for Russ to attack the basket. He attacked the basket and he made the decision he felt was open.” pic.twitter.com/DTEfIw2CZm

There will be no happy faces inside the Rockets’ camp. They know that a lot of work has to be done in the following game if they have hopes of progressing in the playoffs. Who do you think will take Game 7?