Sports may be returning, but fans will have to wait before they can attend live games. In a bid to make the fans feel involved, Galatasaray S.K., a soccer club from Turkey, is sticking cutouts of their fans on the seats. The cutout that stood out was of Kobe Bryant. Back in 2011, Mamba had visited their stadium and interacted with their players and coaches.

This wasn’t Kobe’s first association with soccer. After spending seven years in Italy, Kobe grew up and became a lifelong fan of A.C. Milan. In an interview in 2013, he talked about his experience growing up watching the team and becoming a fan of the sport.

Along with Milan, he has also been a fan of FC Barcelona and has been a part of many promotional activities as well as training sessions with them. He had been visiting them multiple times since the start of the early 2000s. His good relationship with the organization got him an offer in 2016 from their Euroleague Basketball team as well. But he had already planned to retire, so he declined. 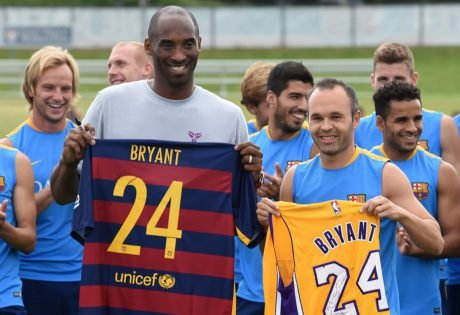 Because of Kobe, soccer has seen an increase in popularity in the country. In 2014, during an interview, Kobe was asked about the growth of soccer in the US. He said, “I think it’s been an evolving process. It has taken us some time to catch up. What a beautiful game the sport is. The tide has turned now and it’s just about trying to get to the world-class level.”

Irrespective of what game he played, Kobe Bryant is loved all across the world by lovers of sports. Even though it has been months since his passing, everyone still misses him and holds him dearly in their heart.