Fabio Fognini Gives His Verdict on The GOAT Debate

The main conclusion drawn from the “Last Dance” documentary of Michael Jordan is to not make him upset. The way he channels this competitive spirit into buckets has made him one of the best to play the game. When Jordan finished 3rd in MVP Voting in 1993, he used it as motivation to win the NBA championship. His Bulls’ team beat the MVP Charles Barkley’s Phoenix Suns and successfully completed a three-peat.

But did Barkley deserve the MVP? He certainly thinks so. In a conversation with Adam Lefkoe on the Lefkoe show, he said, “We had the best record in the NBA. I deserve it.”  He led the Suns to a 62-20 record, while averaging 25.6 points 12.2 rebounds and 5.1 assists per game, which was the best in the league. Perhaps this record is what helped him edge out Jordan, who had a better individual year. Jordan finished third in the voting, despite putting up 32.6 points 6.7 rebounds and 5.5 assists per game.

So was Michael Jordan snubbed of an MVP?

The criterion for NBA MVP is a never-ending debate. While individual performance is the most obvious factor, on many occasions, team record has decided the winner. In 1993, Barkley won because his team was the best in the league, notching five more wins than Jordan’s Bulls. That is why few argue about Barkley being crowned MVP in that season.

However, Jordan is no stranger to being snubbed. His monstrous 1988-89 campaign where he put up 32.5 points, 8 rebounds, 8 assists, 2.9 steals per game was ignored and Magic Johnson took away the title instead. Johnson averaged 22.5 points, 12.8 assists, and 7.9 rebounds per game, leading his team to a 57-25 record. Jordan’s undoing was his team record of 47-35. But when it comes to influence, Jordan was far superior to Johnson. After Jordan, the next top scorer on the team was Scottie Pippen who just 14.4 points while Johnson had two other teammates averaging over 20 points per game. 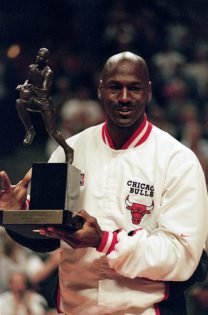 So Jordan was indeed robbed of much-deserved MVPs. Barkley may have edged him in 1993, but 1989 and 1997 were brutal exclusions for His Airness.

“They Were Just Too Small”: Ex-Rockets Player Ridicules Michael Jordan and Chicago Bulls Would Have Beaten Them in 1995