After Avery Bradley and Kyrie Irving released statements, the third member of their coalition, Dwight Howard, released his own statement through The Athletic. The coalition was formed by players who did not support the NBA’s plan to resume the season in Orlando. They believe that there are more important things going on in the country. Basketball should not become the main focus now. 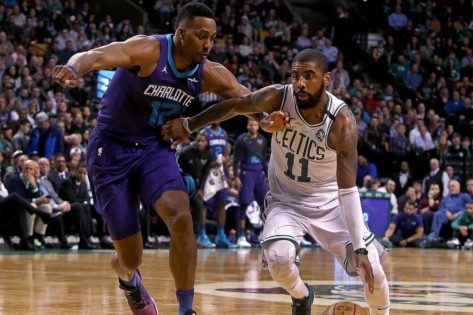 In his statement, Howard says, unlike the popular notion, they aren’t trying to halt the NBA season. “It would be silly to think we could stop a force as powerful as the NBA, nor would we want to, considering the wonderful opportunities they have afforded us.”

Dwight Howard wants to protect players who are afraid

Howard recognizes Irving’s opinion might not be popular. But that doesn’t mean he won’t support him. “As radical as Kyrie may sound, he is 100% correct. We are no longer slaves, so every man has a right to transparency in order to make sound decisions.

“Either way, regardless of what criticism and retribution we face, we still want to protect the players who are afraid to protect themselves. The game will go on with or without those who decide not to play because like we are taught, we are easily replaceable. We are also in full support of our brothers whether we decide to enter or not enter the Orlando bubble.”

Lakers’ Dwight Howard in statement to @TheAthleticNBA @Stadium: “Our main objective is to raise awareness and gain transparency…Many of our fellow players are afraid to voice their concerns and are continuing to follow along with what they believe they have to.” pic.twitter.com/dfTlSPBwpV

Unlike his coalition colleagues, Howard’s approach to the situation has been a lot more composed. He ended his statement by saying, “We support the NBA. But in order to do that properly, we must support every single one of us that represents that name.”

It has almost been a week since Kyrie Irving had the conference call where he said “I don’t support going to Orlando.”

Since then a lot of players and fans have been giving him the infamous “shut up and dribble” comments. As the number of days to the return decrease, the uncertainty around it seems to be increasing. The NBA has been giving regular updates about the premises and the facilities. But despite all the safety measures being assured, there are still concerns about how risk-free it can be.