The NBA’s Board of Governors approved a plan to resume the NBA on Thursday. It was a unanimous vote, with just one team against it: the Portland Trailblazers. The plan involves 22 teams in total, who will be playing eight regular-season games before the playoffs begin.

According to the new schedule, in case the 9th seed is within four games of the 8th seed after the regular season games, there will be a best of two series to determine the 8th seed.

The season will continue on the earlier announced date which is 31st July. According to the schedule, the new last day for the season will be October 12 and the new season will start on December 1.

So why are the Trailblazers unhappy with the new NBA format?

Just a week ago, Damian Lillard had come out and said he won’t play if the Trailblazers don’t have a realistic chance to compete for the playoffs. “If we come back and they’re throwing us out there for meaningless games and we don’t have a true opportunity to get into the playoffs, I’m not going to be participating.”

What is interesting is that the Trailblazers voted no for this format because their players did not like this format. CJ McCollum later tweeted thanking the Portland owners.

We play for an ownership group that actually listens to its players and has a backbone. We voiced what we felt was the best option and they followed our lead. I commend our front office and Jody Allen. https://t.co/mAj5EzeiUh

One reason why the Blazers potentially didn’t want the two extra teams was that they feel it would give easy wins to their competitors. That could be a reason they preferred 20 instead of 22 teams, which meant Phoenix and Washington wouldn’t make it. What is interesting is that the Suns torched the Blazers in their last meeting in March.

Another reason for Blazers opposing the new format could be the NBA Draft Lottery. The 14 teams in the lottery would be the 14 teams that don’t make the playoffs as usual. But, the standings for the lottery will be taken from when the season was stopped. So as of March 11, the Blazers are the 9th seed with the best chance to qualify which means even if they end up losing all games in Orlando, they won’t get better odds. 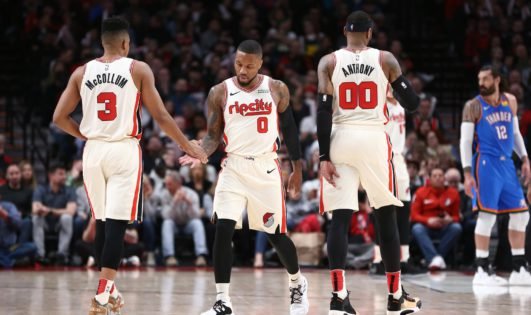 The Trailblazers do have a few positives to look at though. Their schedule is easier than the Grizzlies which means they have a good chance of making the playoff cut. Their two big men, Zach Collins and Jusuf Nurkic will be back from injury, giving them a defensive boost.