The Houston Rockets won back-to-back NBA Championships in 1994 and 1995. The team was powered by ‘The Dream,’ Hakeem Olajuwon. He was the star man for the team and won the Finals MVP award in both their title-winning seasons.

In 1995 he was outstanding in the playoffs for the Rockets and sailed his team through to the finals. The Rockets beat the San Antonio Spurs 4-2 in the Western Conference Finals to reach their second straight finals.

The Finals seemed to be a walk in the park for Hakeem Olajuwon and the Rockets. They made easy work of their opponents, Orlando Magic. Olajuwon led the points tally in every match as the Rockets won the series 4-0.

However, after two successful seasons for the Rockets, many feel ‘The Dream’ was robbed of the 1995 regular-season MVP award. Having won the award the previous season, Olajuwon, unlucky, could not get his hands on the award a second time.

As stated earlier, the Rockets had a very successful season. The Dream carried the team on his shoulders and led them to back-to-back glory. Nevertheless, the 1995 NBA MVP award didn’t reach the hands of Hakeem Olajuwon.

Spurs’ David Robinson was the recipient of the award, something which didn’t sit well with the Rockets players. They considered it a big disrespect that the league overlooked Olajuwon and picked Robinson instead.

The Rockets have a documentary detailing their 1994 and 1995 title-winning seasons. Titled ‘Clutch City’, the documentary even carries footage of a few of his teammates expressing their opinion on who should have been the MVP that season.

Clyde Drexler recalled how he went up to Hakeem and put forth his opinions on who the real MVP was. “I walk up to him and said ‘Dream you know I think that was your MVP that they just gave to David Robinson.’ He grabbed me in the arm and said, Drex do not worry, we will get the big trophy.”

Robert Horry spoke about how Olajuwon’s mind must have processed Robinson winning the trophy before his eyes. “Dream’s looking down there and you could see the steam coming out his ears and he looks saying ‘That’s my trophy.’”

What really went so bad for Hakeem Olajuwon in the 1995 voting process? What made the league award Robinson as the MVP? The stats never really lie.

One major reason which played a crucial part in Robinson winning the award was his team’s position in the table. The Rockets and the Spurs play in the same conference and even are a part of the same division.

1995 regular-season saw the Spurs clinch their respective conference and division. They finished above the Rockets in both tables. Olajuwon and his team were only the third-best team in the Midwest Division, falling behind the Utah Jazz and Spurs. 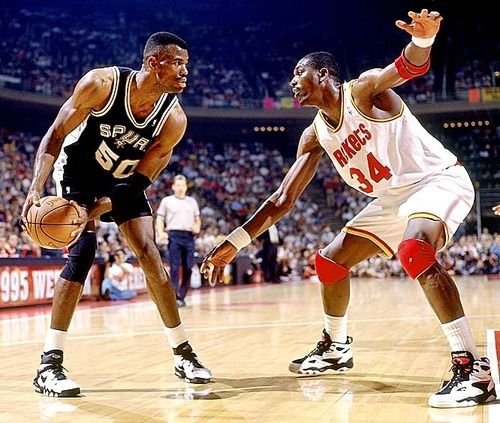 They entered the playoffs as the sixth seed. The Spurs were the number one seed. This was a major criterion as Robinson led his team to the top in his conference as well as the division table.

Personally, Olajuwon led Robison’s average of points per gamer and assists per game. However, Robinson slightly ranked better in terms of field goal percentage. But their team standings at the table also demonstrates their ability to fit into a unit and take them to the top by enduring 29 other teams in the league.

ON THIS DAY: A Certain Michael Jordan Made His Debut and Changed NBA Forever