Philadephia 76ers power forward Joel Embiid looks like he’s going to miss out some game time. The 25-year-old All-Star suffered a left shoulder injury after colliding with the Cleveland Cavaliers’ Ante Zizic in the first quarter.

Embiid reported to the locker room to be evaluated after scoring three points in eight minutes. He returned to the floor briefly in the second quarter before retreating to the locker room a second time. Later, he was ruled out for the rest of the game.

The 7-footer held his shoulder in obvious pain but stayed in the game and missed both free throws. The Sixers pulled Embiid at the next time stoppage and he walked to the locker room while rubbing his shoulder.

The Sixers didn’t give any specifics on Embiid other than to say his shoulder was sprained and he would not return. 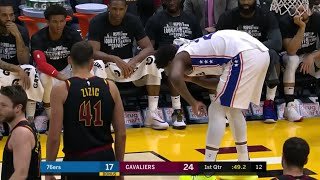 Sixers coach Brett Brown revealed after the game he was “unsure” if Embiid would be available to play in Thursday’s game against the New York Knicks.

“It’s part of the NBA landscape,” Brown said, per John Clark of NBC Sports Philadelphia. “It’s good for the other guys. We gotta find ways to move this program forward and improve. Keeping the boys in the boat. And landing the plane [playoffs]. Keeping the spirit.”

His injury comes as the Sixers are preparing to play an indefinite period without Simmons, who missed his second straight game because of a nerve impingement in his lower back. The team hasn’t given a timeline on when Simmons will be back.

Joel Embiid has a left shoulder sprain and will not return. 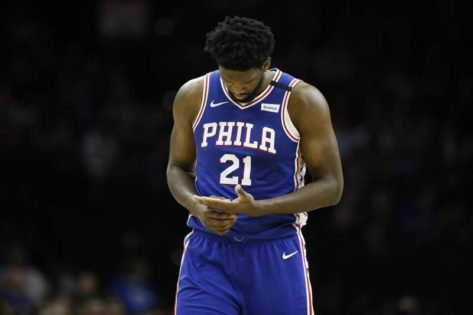 Embiid has a history of minor injuries, mostly sore body parts. However, he has had some major injury as well.