Kobe and Vanessa Bryant: A Beautiful Love Story and a Match Made in Heaven

The NBA community is existing on bits and pieces that the league’s players are providing them with through social media. Former Lakers legend Shaquille O’Neal is making sure that his fans never fall short of entertainment.

There has been a lot of talk about the O’Neal household’s quarantine shenanigans. How the family is dealing with these tough times is surely a teachable moment.

The tweet consists of a video in which Shaq appears to be DJ-ing a party of four. He put up a DJ Diesel concert for his sons Shareef and Shaqir O’Neal, along with stepson Myles O’Neal and nephew Gregory Jordan.

Once the beat drops, all five of them go wild, with Shareef and Gregory removing their shirts and taking turns jumping and dancing atop the kitchen counter. Shaq, who is 7-foot-1 and north of 300 lbs, sensibly did not partake.

His son Shareef O’Neal tweeted the video with the caption “We gotta do all this when we’re with my dad.. my mama don’t play that :'(“

The TNT analyst turned potential DJ turned the kitchen concert up to the song ‘Down” by Marian Hill. He also posted the video on his Instagram account with the caption,

If this isn’t proof of the O’Neal family’s amazing coping mechanisms, then just a couple of days ago, Shaq posted another video of his sons and himself dancing in a funny video on Instagram.
He challenged Stephen Curry, LeBron James, Joel Embiid, Damian Lillard, Dwyane Wade, and Dwight Howard, calling them out in the caption of the  Instagram post.
Shareef and Shaqir also seem to be having their own different kind of fun without their father.
https://twitter.com/NikkiKaySN1/status/1244841550145671168?s=20

Shaq is a man of multiple talents

It is common knowledge that Doctor-Sherrif Deputy-Shaq is a man of many talents. He received his doctoral degree in Education from Barry University with 1,100 other students during commencement ceremonies in Miami Shores.

From playing basketball to DJ-ing at large festivals — and almost everything in between — he really knows how to keep things interesting.

The legend sure knows how to give his audience a good time. Shaq’s Fun House is a party hosted by the retired NBA player. It pops up around the country at major sporting and entertainment events like the Super Bowl. 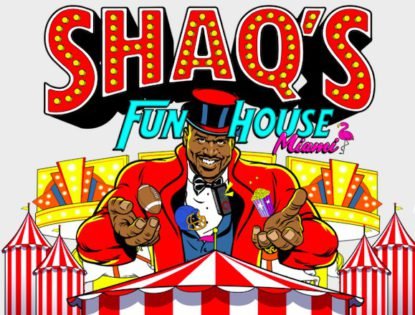 The 7′ 1” baller is officially a deputy at a sheriff’s office in Florida. However, it isn’t his first law enforcement gig, as he was previously sworn in as a sheriff’s deputy in the Atlanta suburbs in 2016.

I’ve decided if I could choose to quarantine anywhere… it would be the @SHAQ household https://t.co/GHhXbZ9oEo

“Nothing Less Than Destroy”: How a Small Pre-Game Incident Led Michael Jordan to Completely Demolish His Opponent

“You Getting Shot for No Reason”: NBA Legend Kareem Abdul-Jabbar Reveals His Sad Message to His Kids