When asked about his opinion on NFL players kneeling during the anthem, New Orleans Saints quarterback Drew Brees said, “I will never agree with anybody disrespecting the flag of the United States of America or our country.” These comments drew ire from his teammates and former NBA champion, Stephen Jackson, as well. 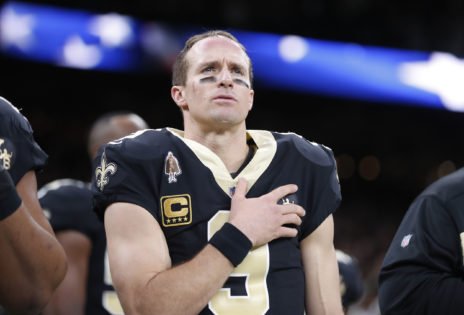 In the interview with Yahoo Finance, he went on to say, “Is everything right with our country right now? No, it is not.  But I think what you do by standing there and showing respect to the flag with your hand over your heart, is it shows unity.”

Brees had also spoken out against Colin Kaepernick when the 49ers quarterback had taken a knee to protest against police brutality in 2016. Surprisingly, he participated in the social media blackout on Tuesday.

Stephen Jackson hits out at Brees and applauds his Saints teammate

In a profanity-filled blunt video on Instagram, Jackson called out Brees for his poor timing. “Bad timing, Drew Brees. You play for New Orleans and you live in New Orleans. All the black people in New Orleans support you. Drew Brees, you gotta be a little more sensitive to the timing. You can’t just be saying s**t out your ass.”

Jackson was a close friend of George Floyd, who died in an alleged homicide on 25th May. Since then, he has been active in protesting against racism and injustice in the country. He has been out on the streets leading protests and has also used his social media to do the same. Recently he also came out and said he will be supporting Floyd’s daughter Gianna.

Michael Thomas, Brees’ teammate, immediately took to Twitter to lash out. He tweeted twice; “He don’t know no better” and then “We don’t care if you don’t agree and whoever else how about that,” both aimed at Brees. Jackson appreciated Thomas calling out his own teammate. “Shout-out Michael Thomas man, way to hold Drew Brees accountable, Mike. I don’t give a damn if he throw you all them touchdowns. Hold his ass accountable.”

Many other NBA players like LeBron James and Trae Young also commented on Brees’ statement and were not pleased by his words.

How Does the Atlanta Hawks’ Starting Line-up Looks Like for the 2020-21 Season?