Joe Burrow will go down in history as the top draft pick at the 2020 NFL virtual draft. The Iowa born star achieved the honor on the back of a stupendous final collegiate season with the LSU Tigers, where he shattered many records. However, things were not as rosy for the Bengals quarterback when he was a college freshman and sophomore.

A glance at his early college career stats after an impressive high school showing would lead many to regard Burrow’s position as a backup quarterback to be a criminal waste of promising talent.

As the Athens High School quarterback, Burrow passed for 11,416 yards and registered 157 passing touchdowns. He made 670 completions from 977 attempts across three seasons.

Like most modern quarterbacks, he offered a significant threat going forwards. Burrow rushed for 2,067 yards and scored 27 touchdowns. As a result, he landed offers from college sides all over and opted to sign with The Buckeyes.

Burrow red-shirted his freshman year in college and turned out at the Ohio Stadium in 2016. Here he featured as the backup to J. T. Barrett, who has never played in the NFL and went undrafted in the 2018 NFL draft. What an oversight by the Buckeyes!

The freshman Burrow played in five games throughout the 2016 Big 10 season. In his limited opportunities, he made 22/28 passes at a 78.6% completion and had two passing touchdowns to his name. With 58 rushing yards, he ranked sixth when going forward and made one rushing touchdown. 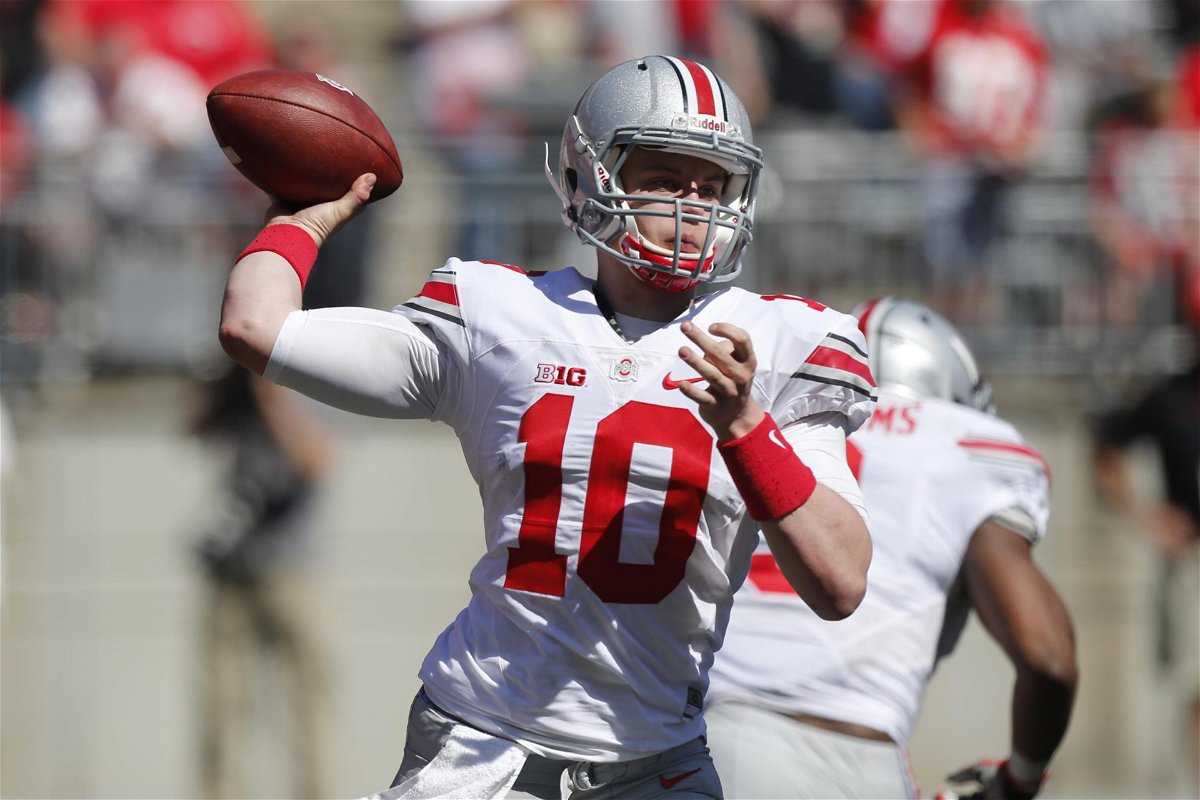 The next season, Burrow fell further in the pecking order as current Washington Football Team quarterback Dwayne Haskins replaced him as Barrett‘s backup.

As a third-choice quarterback, Burrow made just 11 passing attempts and amassed 61 passing yards. Incidentally, he shared a dressing room with a future No.2 NFL draft pick, Chase Young, for the campaign.

The younger player, Haskins, grabbed his big break with both hands. He made a positive impression and kept his spot ahead of Burrow for the 2018 NCAA season. 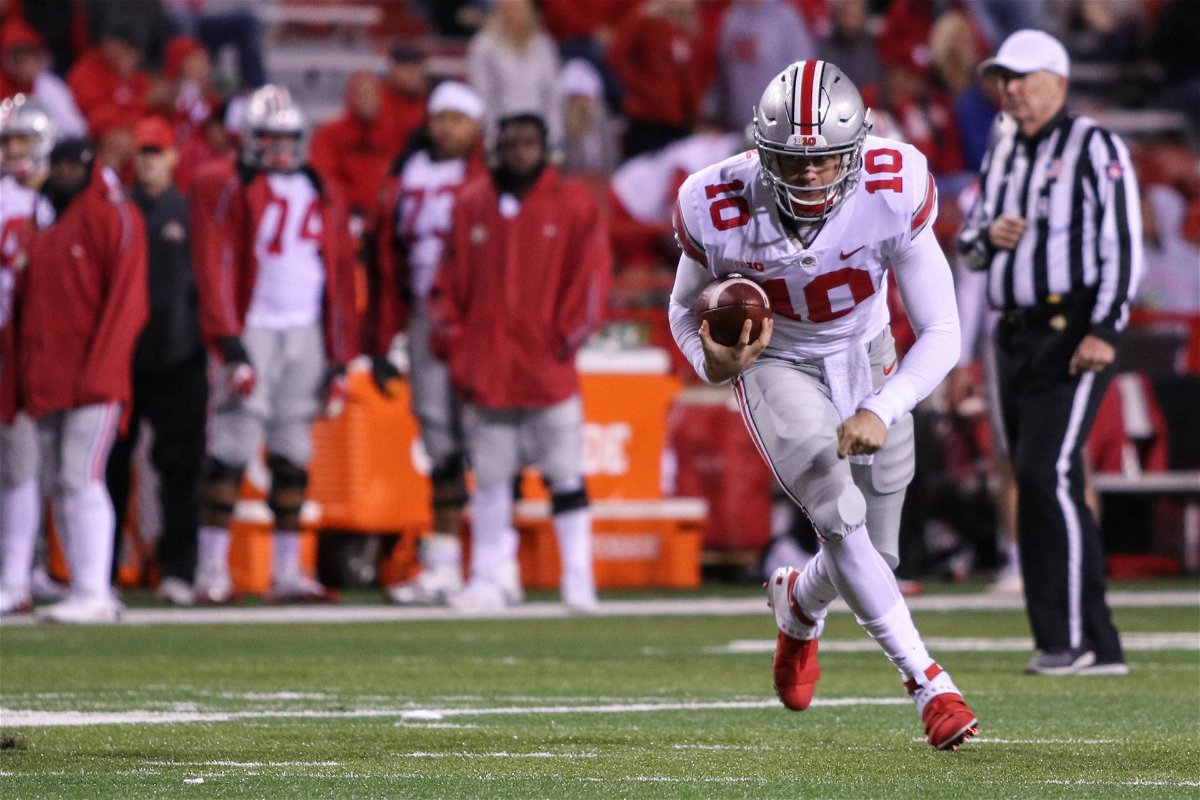 Seeing no breakthrough for regular football, Burrow departed Ohio State to secure game time and provide momentum to his college career. The transfer paid dividends and saw his stock skyrocket in the NCAA.

Joe Burrow dominates the NCAA with the LSU Tigers

Joe Burrow moved from the Big 10 to the SEC and turned out for Louisiana State University as the Tigers’ starting quarterback for 2018. He played in every game and completed 219 passes from 379 attempts for a 57.8% completion. When he turned out for his eleventh start of the season against the Rice Owls on November 17, 2018, he surpassed the total number of games he played as a substitute at Ohio State.

Joe Burrow threw 16 touchdown passes and a measly five interceptions in 2018. On the back of his performance, the LSU Tigers finished the regular season with a 9-3 SEC (West Division) record and earned a spot at the season’s Fiesta Bowl.

Burrow’s performances may have led to The Buckeyes kicking themselves for not letting him prove himself. But, for the youngster, the best was yet to come as his 2018 season paled compared to his record-breaking senior year.

Read: All the Heisman Trophy Winners Since 2010 Including Joe Burrow and Lamar Jackson

In 2019, the fifth-year senior made 402 passes from 527 attempts. He had a high completion percentage of 76.3 (NCAA leader for 2019). Burrow also set an NCAA record for 60 passing touchdowns and led the NCAA for passing yards with 5,671. He passed for two or fewer touchdowns in just twice all season.

The LSU Tigers maintained an unbeaten regular-season record and advanced to the SEC championship game. Here, Joe Burrow came to the fore with four passing touchdowns to help LSU win the division and advance to the Peach Bowl. Also, he claimed the prestigious Heisman Memorial Trophy for 2019.

Joe Burrow played as a quarterback in three college bowl ties. He claimed a win in each one of these games, with one coming in 2018 and the other two games coming in the LSU Tigers’ historic 2019 NCAA season. Hence, fans opine that the quarterback saves his best for the crunch games and is a big-game player.

The SEC West Division’s third-placed side played in the Fiesta Bowl to close out its 2018 NCAA season. Their opponents the UCF Knights went unbeaten in the AAC East Division. Eight minutes into the New Year’s Day clash, the UCF Knights took a 14-3 lead.

Joe Burrow got his first contribution with a minute left in the opening 15 as he passed for a 22-yard touchdown. He maintained his rhythm in the second quarter with consecutive touchdown passes to take the LSU Tigers 10 points clear. The Knights hit back four seconds before halftime and ensured that a field goal was all that separated the teams.

Burrow passed for a fourth touchdown early in the third, but he couldn’t guide his side to the end zone again. Nevertheless, he successfully got the special team within field goal range on three occasions.

As a result, the Fighting Tigers claimed the Fiesta Bowl for 2018. In retrospect, the win set the tone for their unbeaten 2019 NCAA season.

The Peach Bowl served as a semi-final to the CFP’s National Championship game. Joe Burrow and the LSU Tigers came up against the Oklahoma Sooners at the home of the Atlanta Falcons. 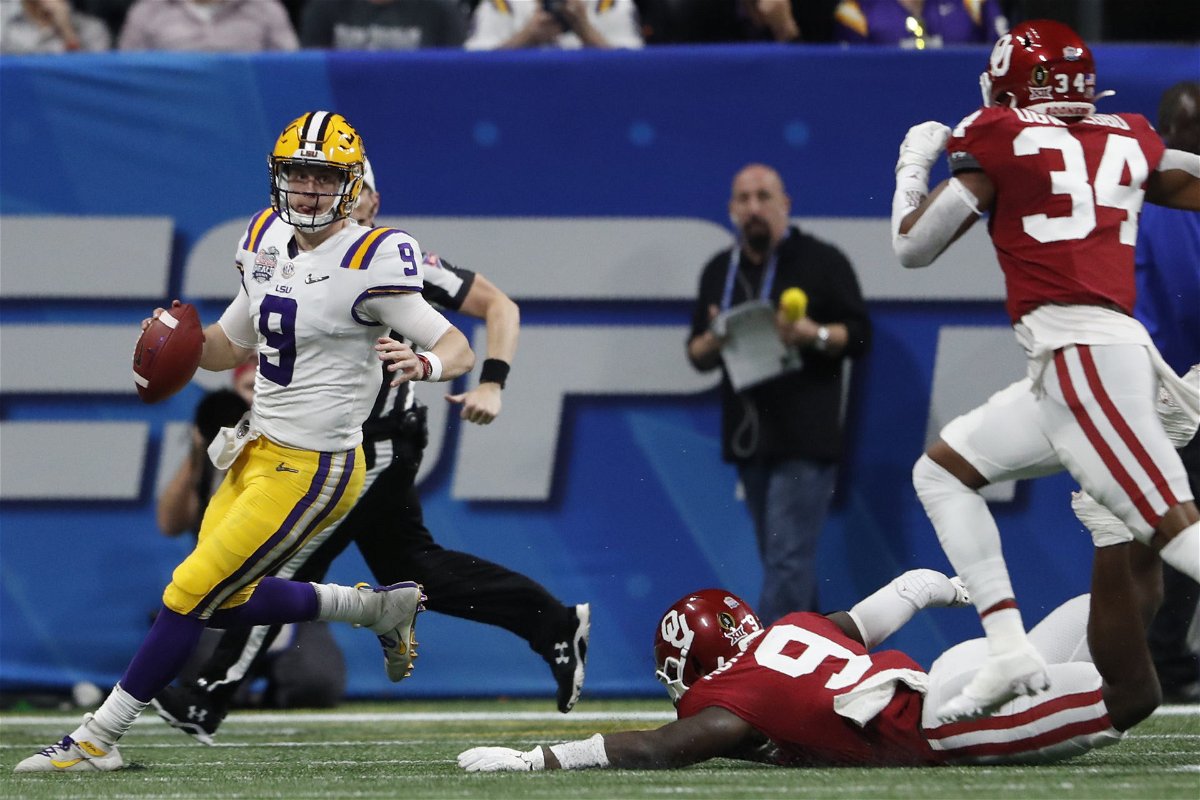 Burrow saved the big game showing for the big stage yet again and passed for seven touchdowns in a 63-28 trouncing. The quarterback found Justin Jefferson for a first touchdown pass in the first three minutes. The Sooners quickly leveled proceedings, but this only awakened the LSU Tigers.

The 23-year-old quarterback passed for four successive touchdowns starting from the end of the first quarter to early in the second quarter. The Sooners registered a rushing touchdown, but Burrow passed for two more touchdowns before halftime. 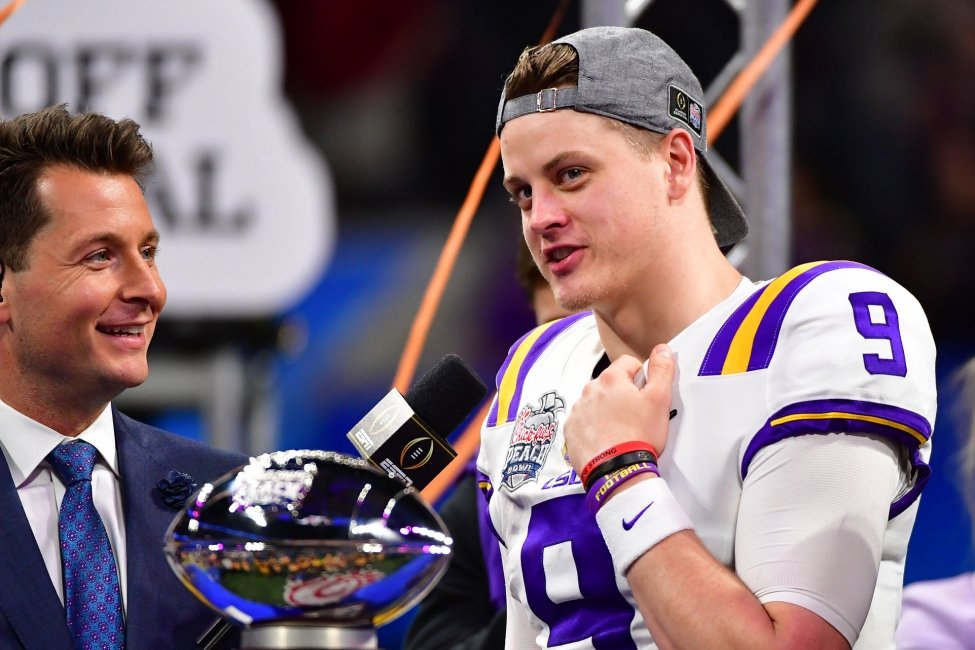 He passed for seven touchdowns in the half and four in the second quarter alone to take LSU 35 points ahead. Later, in the third quarter, Burrow contributed in an eighth touchdown when he carried the football into the end zone from three yards out.

Luckily for the LSU Tigers, their quarterback carried this imperious form into the CFP finale two weeks later.

The Peach Bowl champions faced the ACC’s Clemson Tigers in the 2019 season’s college football finale. Clemson themselves were unbeaten in 2019, and the prospect of two teams with identical 14-0 records competing on the field equaled must-watch football for fanatics and casuals.

Clemson took the game to the LSU Tigers and opened the scoring eight minutes into the tie. Later, Burrow came into his own at 2:20 from time with a 52-yard pass to open LSU’s account. However, the No.3 seeds didn’t get blown away and took a 10 point lead midway through the second quarter. 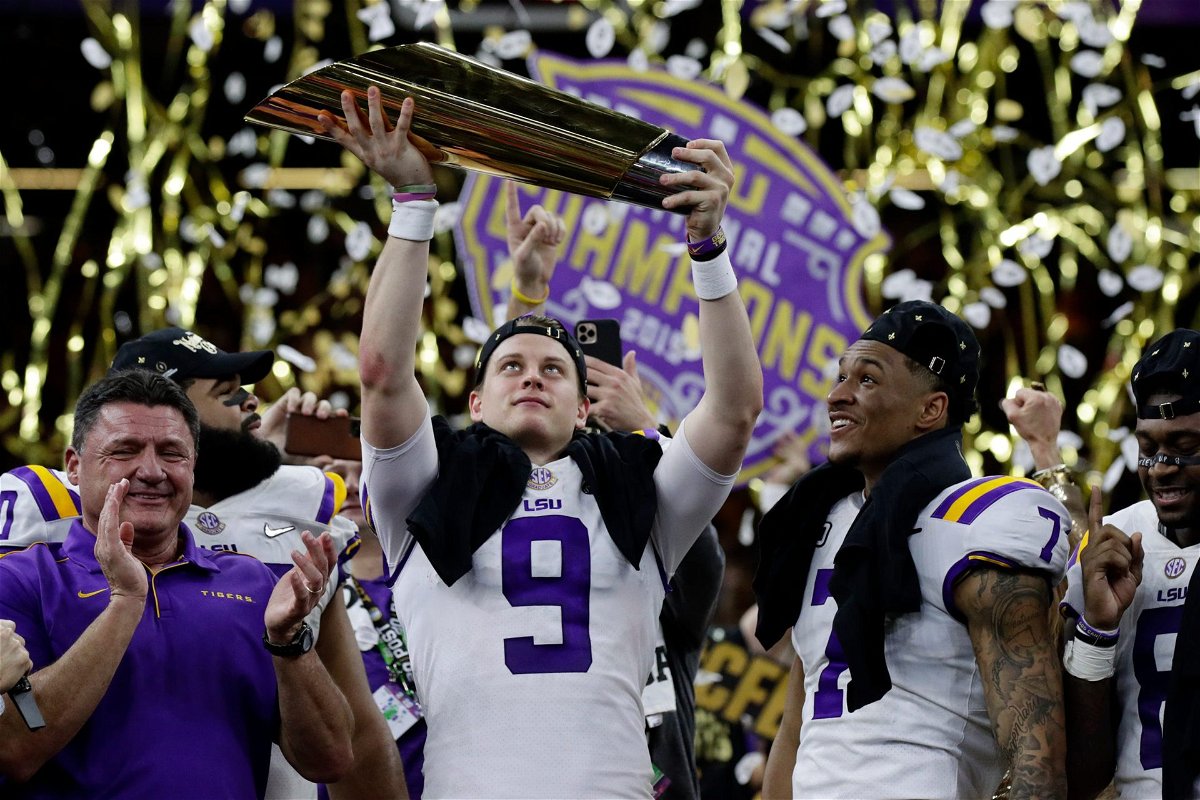 In his last college game, Joe Burrow reminded everyone about his rushing prowess with a three-yard dash across the field. Later, he passed for two more touchdowns to guide the LSU Tigers to halftime 28-17 to the good.

Clemson closed in once more, but Burrow came to the fore again with two touchdown passes. His performance led the team to a 42-25 win and the title of the best collegiate side in the country.

Burrow’s record-breaking season had the country going gaga over his phenomenal abilities. As a result, fans and analysts projected him to be the top draft pick at the 2020 NFL Draft. This meant he would join the 2-14 AFC North team, Cincinnati Bengals.

There were no surprises on draft day with The Bengals drafting Joe Burrow. To ensure no debate surrounded their first choice, the franchise parted ways with long time servant Andy Dalton.

The future is bright for Joe Burrow. Despite a torrid team record in the NFL, he has excelled individually. Fans will hope to see the young quarterback rise to the levels he attained in his last college season. In doing so, could provide football with the big name it needs to go toe-to-toe with Patrick Mahomes and Lamar Jackson.

These young players’ rivalries are what will be at the forefront of the NFL once the likes of Tom Brady, Drew Brees, and Aaron Rodgers hang up their boots.