Donald Trump, Colin Kaepernick & The Trajectory of their Love-Hate Relationship

Since Colin Kaepernick started kneeling during the national anthem before the games, he has been subjected to all sorts of criticism. As a result, he has been without a team since 2017.

He last played for the San Francisco 49ers. Surprisingly, no team has tried to take a chance on Colin since then. Notably, he has made multiple efforts to make it back to the league but he hasn’t found any success yet.

One of the biggest criticizers of Colin was Donald Trump, who was the President of the USA then. He condemned his actions and claimed he was disrespecting the nation.

However, since then Trump has also shown Colin his softer side. Their love-hate relationship runs very deep, and here are the major things Trump has said since then.

Donald Trump against Colin Kaepernick in 2017

Colin Kaepernick had started kneeling during the national anthem to support the cause of black people. Unsurprisingly, there were many people who believed Colin’s actions weren’t right on the national stage.

President Donald Trump was one of them. Trump talking about Colin said, “Wouldn’t you love to see one of these NFL owners, when somebody disrespects our flag, to say, ‘Get that son of a bi**h off the field right now. Out! He’s fired. He’s fired!’” 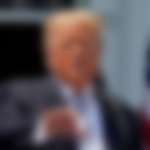 Trump added, “You know, some owner is going to do that. He’s going to say, ‘That guy that disrespects our flag, he’s fired.’ And that owner, they don’t know it [but] they’ll be the most popular person in this country.”

In 2020, Donald Trump claimed that Colin deserves another shot in the NFL

After absolutely annihilating Colin Kaepernick in a 2017 speech, Trump showed his support for the former 49ers quarterback a few years later.

Donald Trump claimed that Colin deserves to get another shot in the NFL if he is playing well. He said, “The answer is absolutely I would, as far as kneeling, I would love to see him get another shot but obviously, he has to be able to play well,” he continued. “If he can’t play well, I think that would be very unfair.”

It is fair to say that Donald Trump had a valid point in his statement during 2020. If Colin is playing at a level that is required in the league, wouldn’t it be only right if he gets another shot to prove his worth?

Watch This Story: Antonio Brown Announces His Next Album Will Feature Only Athletes From NBA, NFL, And More

Abhimanyu Chaudhary is an NFL author at EssentiallySports. He is currently pursuing a Bachelor's degree in Business Administration at Sharda University. Abhimanyu has been a life-long fan of the Los Angeles Lakers and Liverpool FC.
ARTICLES BY AUTHOR