WATCH: Jimmie Johnson Spins in His Return Race After a Late Contact With Brad Keselowski

Saquon Barkley and Christian McCaffrey have been terrific in the NFL over the last two seasons. Both running backs registered 1,000+ rushing yards last year. They’ve been tipped for another stellar season in the league this 2020.

However, when it comes to a one-on-one confrontation, who would come out as the winner?

In the latest installment of Speak For Yourself, host Emmanuel Acho delved into the comparisons between Saquon Barkley and Christian McCaffrey. Both running backs have been a class apart from the rest of their opponents over the last two years.

However, Acho is quick to tout the NY Giants man as the more superior running back.

"When I’m specifically looking at a RB in a big picture, not just the team they’re playing for… it’s Saquon Barkley." — @EmmanuelAcho pic.twitter.com/UkUgyoF07H

“Who would be the best player regardless of their team? It’s simple, it’s Saquon. Look at Saquon and what he does from a big-play perspective.

“But Saquon, he’s got 24 carries of 20-plus yards to McCaffrey’s 12. Now, it’s so hard to differentiate between really great and really greater because they are both elite and the top-two running backs in the league.

“But McCaffrey is known for being a high-volume receiver, he’s set NFL record catching the ball. It’s exactly what he does extremely well in addition to running the ball,” Acho said. 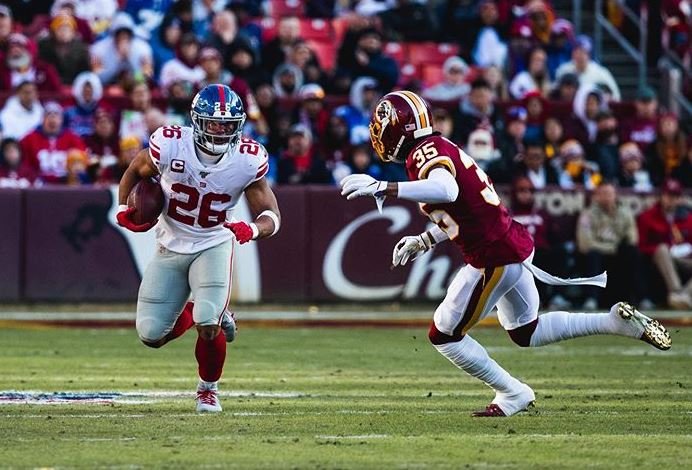 Saquon had a tremendous rookie season with the Giants in 2018. He set numerous league records as well. Barkley posted a 1,300+ yard rushing season at the end of his rookie year and also made the Pro Bowl team.

Barkley had another decent outing in the league last year. He crossed the 1,000 mark for rushing yards yet again. He also registered six TDs for the Giants.

“So when I’m specifically looking at a running back in a big picture, not just a team they’re playing for, it’s Saquon Barkley before it is Christian McCaffrey,” Acho concluded.