“My Conditioning Is Not Where It Needs To Be”: LA Clippers Guard Delivers Troubling News for the Team

Deshaun Watson was ‘hot property’ back in 2017. He was the third quarterback to be picked up in the 2017 NFL draft behind Mitchell Trubisky (second overall to Chicago Bears) and Super Bowl LIV MVP Patrick Mahomes (10th overall to the Kansas City Chiefs). Houston Texans acquired the 12th pick from Cleveland Browns. This was in exchange for their 25th pick from the 2017 draft and a first-round pick from the 2018 draft.

The Texans took a major gamble by picking Deshaun Watson. Thankfully, it paid off. In his two full seasons as a starter, Watson led the Texans to an 11-5 and 10-6 record in the NFL, making the playoffs on both occasions. However, a large part of that success is owed to star wide receiver, DeAndre Hopkins who was recently allowed to depart for the Arizona Cardinals.

Can Deshaun Watson be same threat without DeAndre Hopkins?

"I think he can be better this year." — @KyleBrandt pic.twitter.com/mHsJhFdWxh

On a recent segment of Good Morning Football, hosts Nate Burleson, Kyle Brandt and others were discussing the repercussions of Hopkins’ exit from the Texans setup. Critics have pointed out that Deshaun Watson might not see the same kind of success this year. This is due to Hopkins’ departure. However, Kyle Brandt feels differently about the issue.

“I think Deshaun can be better this year because there’s a thing that happens if you lose a star wide receiver, you run the offense. You grow, it’s evolve or die, you know,” Brandt said on NFL Network’s GMFB. 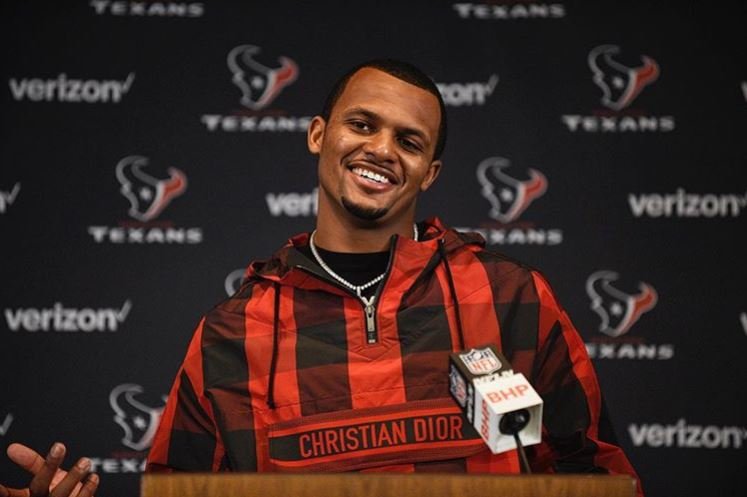 “I remember when he came out, there was a ton of people, including his college coach who said ‘Passing up on Deshaun Watson is like passing up on Michael Jordan’. Now, I would say he has more of a LeBron quality to him than a Michael Jordan on the field.