Kyler Murray was the first pick at the NFL 2019 draft. The former Oklahoma Sooners man, who was also a first-round pick in the MLB draft, was picked up by NFC West side Arizona Cardinals.

Murray, still just 22, impressed for the Cardinals in his debut season. The 2018 Heisman Trophy winner is touted for big things in the NFL, especially due to his dual-threat attacking style. A certain former NFL Hall of Famer tipped Murray to achieve big things in the near future.

While speaking to SportsAZ360’s Brad Cesmat, Moon said “Kyler is a guy whose ceiling is unbelievable because he’s only going to continue to get better. He was [Offensive] Rookie of the Year last year. He had a solid season. Started off slow got better as the year went on.”

Kyler had a rocky start to his NFL career with the Cardinals. However, he improved over the course of the season and ended 2019 on a strong note. Murray had a 64.2 pass completion percentage and threw for 3,000+ yards in his rookie year.

Kyler Murray has shown steady progress since joining the Cardinals in 2019. Murray was adjudged the NFL Offensive Rookie of the Year last season.

He will be crucial for the Cardinals this year as well. In light of Patrick Mahomes’ recent 10-year deal, Murray has also been tipped to bag a similar deal if he continues to impress in 2020. 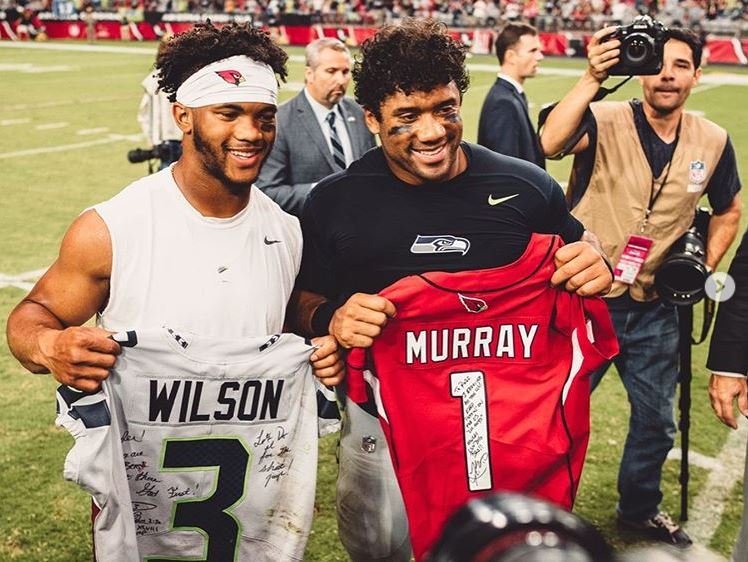 While speaking to Sports Illustrated, three-time NFL Pro Bowl member Maurice Jones-Drew said he would sign Murray to a long-term deal if he was in Arizona.

“I’m taking the 2019 Offensive Rookie of the Year, Kyler Murray. The kid is a ripe 22 years old and the centerpiece of an Arizona Cardinals team on the come-up.

“The 2019 No. 1 overall pick lived up to the hype as a dual-threat quarterback who thrilled in Kliff Kingsbury’s Air Raid offense with impressive throws and timely rushes.

“Some might argue that Lamar Jackson would be a better choice, but Murray’s playing style isn’t quite as concerning as the reigning league MVP’s,” Maurice said.