Tom Brady has been causing quite a stir in the NFL world. While speculation about what the future holds for the 45-year-old QB is abounding, Brady is also igniting discourse with news unrelated to the game.

Last year was a series of ups and down for TB12, both on and off the court. With his postseason run coming to an end, the spotlight and pressure are greater than ever. But before the QB made his playoff exit, he sparked discourse over one particular choice.

Tom Brady shocks the NFL world with his choice

The NFL world is aware of Brady’s interest in fashion. The QB is often seen dressed to the nines, especially before big games. But before the QB headed into his face-off against the Dallas Cowboys, fans were forced to take their minds off the game and dwell on the object TB12 was holding.

After the divorce announcement that took the NFL world by storm, any connection between Brady and his ex-wife Gisele Bündchen is blown up. A few weeks ago, she stepped back into the modeling world after a long hiatus with a campaign for Louis Vuitton.

In LV’s collaboration with Yayoi Kusama, Bündchen posed topless and garnered the attention of the fashion world. 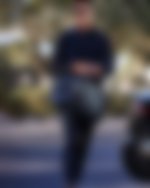 Undoubtedly, fans were gobsmacked to see TB12 holding a duffel bag from the same collection as he headed to face the Cowboys. Was it a deliberate choice or is Brady just a fan of the brand? While that is something fans may never know, the event made headlines across the board.

Brady and his ex-wife are united on one front

Brady and Bündchen were undoubtedly the NFL’s most influential couple. Given the success in their respective careers, the former duo has a very large audience. They shocked fans when rumors of a potential split came to light. At present, the QB and former Victoria’s Secret Angel are united on one front.

Parents to two children, Benjamin and Vivian, Brady and Bündchen take their responsibilities very seriously. In the statements that were released for the public, the couple mentioned their agreement to be co-parents. From observation, the former couple is still in agreement on that front as reports of separate family outings and celebrations came to light. Currently, TB12 has left the NFL world in a state of disarray with regard to his future in the league.

Will Brady return for a shot at an eighth title or will fans bid farewell to the most successful QB in the game?

Anika Gomez is an NFL writer at Essentially Sports. She holds a degree in Journalism, Psychology, and Communicative English from the National School of Journalism and Public Discourse. Anika loves American Football, Formula 1, Basketball, and Tennis.
ARTICLES BY AUTHOR