While a lot is spoken about Tom Brady and Rob Gronkowski, his incredible partnership with Randy Moss three years prior to Gronk’s draft takes a backseat. However, New England Patriots fans can’t be blamed for that. This is because the duo had just that one stellar regular season (16-0) and the subsequent years paled in comparison to it.

In Moss’ first season at New England, he shattered the NFL record for receiving touchdowns. The record was previously held by San Francisco 49ers’ Jerry Rice. However, the wide receiver set the record in 1987 in a shortened 12 game season. The 23 touchdowns Moss notched up en route the New England Patriots unbeaten regular season is yet to be broken. 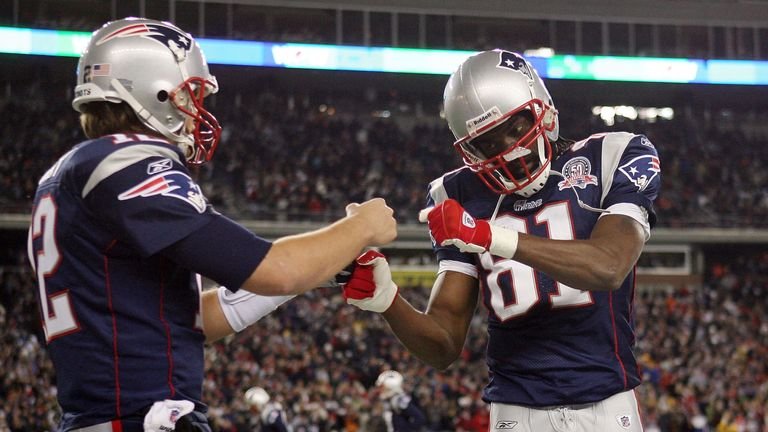 The wide receiver had a phenomenal game against Buffalo Bills and notched up 4 of the 23 touchdown receptions. However, the duo was unable to conjure magic in the playoffs with Moss not scoring a touchdown for 2 consecutive games. It was his longest spell without a touchdown in the entire campaign.

A year later, Moss became a free agent but elected to re-sign with Patriots and continue his mesmerizing partnership with Tom Brady. However, his wish was cut short as the then 3× Super Bowl winner went down with a season-ending ACL injury in game 1. In 2008 and 2009 seasons, he notched up a paltry 24 touchdowns.

In 2010 he had a miserable start and Tom Brady found a new receiving target in Rob Gronkowski. Brady had a long and prolific partnership and basked in Super Bowl glory three more times. However, he is yet to find a receiver to match the highs of his 2007 partnership with Moss.

At the time of Moss’ Hall of Fame induction Brady expressed regret at not throwing the football to his wide receiver even more in that phenomenal season. He said, “I regret all those times I didn’t throw it to you deep Randy.”

One wonders how many more touchdown receptions Moss would have registered. At the same time, Brady’s astonishing 50 touchdown passes record too could have increased even more. Check out their outstanding season.