Tom Brady and the Tampa Bay Buccaneers got off to a flying start to kick off their NFL 2021 season. Two wins against the Atlanta Falcons and Dallas Cowboys cemented their place as NFC Championship favorites. However, another team has usurped them with a dominating victory. Los Angeles Rams humbled the Super Bowl Champions 34-24.

Veteran quarterback Tom Brady did not have the greatest of days at SoFi Stadium. He covered 434 yards with only one touchdown, while rival quarterback Matthew Stafford smoked him. He had four touchdowns with 343 yards, delivering a remarkable performance.

In the post-game interview, Brady delved into how the Rams dissected the Bucs. The NFL legend not only lamented his team’s poor offense, he praised the Rams as well.

“We got off to a slow start. So I think anytime you do that you’re fighting behind all day and I think we played a good team that didn’t turn the ball over. They played well offensively, and we just didn’t make enough plays on offense early to kind of take control of anything. So just not a great complimentary game by us. Gotta learn from it.”

Brady even talked about the noise inside SoFi Stadium. One of the biggest and grandest in the world, the stadium apparently deterred Brady for registering another GOAT performance. “It’s good, it’s good. It’s a very loud stadium. One of the louder ones we’ve been in. But there’s a lot of other loud stadiums. We gotta do a better job of handling it.” 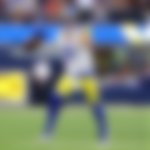 Despite the Bucs being disappointing, we cannot disregard the superb performance from the Los Angeles Rams. Heading into the game as underdogs, the Rams refused to come up short and delivered a painful blow to their NFC rivals. Tom Brady had nothing but praise for them in his post-match conference.

Stafford is just the 3rd QB to have a 4 TD-0 Int game when starting against Tom Brady.

The other 2 are Drew Brees (who did it twice) & Alex Smith. pic.twitter.com/uIIQc8thPV

Brady also praised quarterback Matthew Stafford. With four touchdowns, Stafford was clearly the better quarterback on the field. “He’s a great quarterback. He throws very well. Obviously, they made some big plays on us. They have a good group of skilled players. They have a very good offence.”

With the Patriots next, can Brady and Co put this loss in the rearview mirror? Amidst tensions between Bill Belichick and Tom Brady, can the Patriots spoil the Foxborough return of the city’s favorite son?