Colin Kaepernick has had a very prominent media presence for a very long time. Even as a football player, the QB was often in the news. After his last active season in the NFL, the former 49ers QB has remained in the limelight for more than just one reason. One of the main questions surrounding him is whether Kaepernick would be returning to the NFL and which franchise would he play for.

While this question remains to be answered for the foreseeable future, fans can now watch Kaepernick in action elsewhere. The QB has had a docuseries made on his life which has become important for all Kaepernick fans, which brings to light Kaepernick’s adoptive parents who have been of significant support to him- Rick and Teresa Kaepernick. The actor playing the role of Rick Kaepernick does so to perfection. 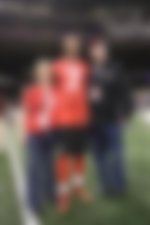 Offerman played the role of Kaepernick’s father, alongside Mary-Louise Parker as the QB’s adoptive mother. Offerman has done multiple projects previously. These have included comedies and satires like ‘Parks and Recreation’, ‘Fargo’ and ‘American Body Shop’. Along with this, Nick is also a voice artist and has lent his voice to various films like ‘Hotel Transylvania 2’ and ‘Ice Age: Collision Course’.

Offerman was also part of The Founder, a film about the founders of the fast-food chain McDonald’s. The actor also was an Emmy nominee for the Outstanding Host For A Reality Or Competition Program for two consecutive years.

What has Colin Kaepernick been doing since 2017?

The docu-series has not been the only thing Kaepernick has worked on since becoming a free agent after the 2016 season. The former 49ers QB has since been trying to get back to playing in the NFL. Kaepernick recently had a workout with the Las Vegas Raiders, after their owner said he deserved a shot in the NFL once again. It was his first workout in five years.

Kaepernick has tried many ways to stay in the public eye. The series has definitely been an important part of it. It has shown Kaepernick as developing into the individual he grew to be. The impact of his adoptive parents on his mindset and his beliefs has been tremendous, and they have supported Kaepernick even in the toughest of times.

Watch This Story: Paige Spiranac Was Once Forced to Issue an Apology to Future NFL Hall of Famer Ben Roethlisberger

Prithwiraj Gupta is an NFL author at EssentiallySports. He has completed his Master's in History from Pune University. The contact aspect of the NFL made him interested in the sport.
ARTICLES BY AUTHOR