The Olympics are a platform for athletes to make history. Athletes cement themselves as legends at the Olympics, and the Tokyo Olympics 2020 are no different. For the first time in history, two wrestlers from the United States qualified for the finals, and they’re both women.

Adeline Gray and Tamyra Mensah-Stock weren’t the most popular names ahead of the Tokyo Olympics 2020. With the spotlight primarily on the male wrestlers like Gable Steveson, Kyle Dake and more, the women’s wrestlers remained in the shadows. However, Gray and Mensah-Stock have completely outdone their male counterparts.

Adeline Gray qualified for the women’s 76kg freestyle final in stunning fashion. First, she beat Tunisia’s Zaineb Sghaier 6-0. In her second match, she faced an uphill battle against Turkey’s Yasemin Adar. She made a stellar comeback against the Turkish grappler, winning 6-4. In the semifinal, she swept aside Kyrgyzstan’s Aiperi Medet Kyzy 3-2.

In the final, she came up short to Germany’s Aline Rotter Focken, but clinched silver for the United States. Her performance was so inspiring she earned plaudits from many, including former Olympic Champion Jordan Burroughs. While she claimed the runner-up award, her teammate might just go all the way today.

At the Olympics in women’s freestyle coming into these games, USA Wrestling has had two TOTAL finalists ever.

Adeline and Tamyra matched that in 24 hours. The progression is incredible. Adeline loss stings, but some perspective can soothe.

Tamyra Mensah-Stock is arguably the best female wrestler in the world and is the current women’s wrestling world champion as well as the US’ best hope for a medal. Now that Adeline Gray has done it, her confidence must’ve skyrocketed. She too won three matches in dominant fashion to qualify for the finals. In the finals, she faces Nigeria’s Blessing Oborududu. 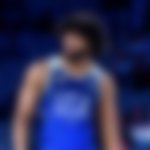 With two nights of wrestling over, the US men’s wrestling team has not produced strong results. None of the athletes have come close to sniffing the hardware in Tokyo, and Cuba’s Luis Alberto Orta Sanchez and Mijain Lopez Nunez picked up gold.

The likes of G’Angelo Hancock, Ildar Hafizov and John Walter Stefanowicz Jr came nowhere close to the podium and exited in the preliminary rounds, which puts added pressure on the shoulders of Kyle Dake, Gable Steveson and even young Sarah Hildebrandt to deliver.

Can the men wrestle their way to the finals or will the US women’s wrestling team outclass the men at the Tokyo Olympics 2020?