Track and field legend, Usain Bolt has fans all over the world. Notably, among the many celebrities he shares a bond with, Prince Harry tops the list.

Prince Harry had flown to Jamaica as part of Her Majesty’s Diamond Jubilee celebration. This was where he met Olympic legend, Usain Bolt, and the two hit it off right away.

This was also when Usain Bolt and the Prince decided to race each other. The race was held at the West Indies stadium and was expected to be quite the entertainer.

Notably, with a rather cheeky start, Prince Harry won the race and defeated the world’s fastest man. However, Usain then accused the Prince of cheating and demanded a re-run. Prince Harry, however, said he was too busy for that.

Congratulations @usainbolt – now you're officially the greatest you might be ready for a re-run! 😉 Happy 30th -H. pic.twitter.com/Wa0yOZMDc2

— The Duke and Duchess of Cambridge (@KensingtonRoyal) August 21, 2016

Fast forward to 2016, Prince Harry wished Usain Bolt on his 30th birthday, asking Bolt if he was ready for a re-run. That year, in Rio 2016, Bolt claimed the Gold medal again, showing everyone why he is known as the greatest.

“Congratulations– now you’re officially the greatest you might be ready for a re-run! Happy 30th -H,” read the tweet.

We wonder when this re-run will actually happen and if it does, whether the Prince will beat Bolt again or not.

Bolt and Prince Harry indeed share a wonderful relationship. The star sprinter had previously revealed that he wanted to throw the Prince not one but multiple parties before his wedding.

“I’m thinking about having three. My idea is to have one in Kingston, one in Vegas, and one in London,” said Bolt.

Bolt was seriously invested in the idea. In fact, he was ready to seek permission from Meghan Markle himself and even take the responsibility of dropping the Prince home safe and sound. He believes that those were the Prince’s last nights of freedom! 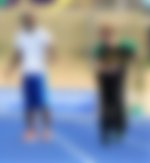 “I will personally call Meghan and take responsibility for getting him home safely after each,” said Bolt. “I know it’s a lot to ask but these are his last nights of freedom.”

Even though these parties never actually happened, both Bolt and the Prince remain the best of friends. Are you looking forward to a re-run between Bolt and Prince Harry?