Rafael Nadal has been on the top of the ATP Tour since a decade and a half. The Spaniard has built a legacy for himself, which has enticed tennis fans from all over the world. However, with his continuous victories on the ATP Tour, one thing has also remained the same – Rafael Nadal’s racquet.

Rafael Nadal currently plays with the original Babolat Aero Pro Drive from 2005, which is under a paint job of the Babolat Pure Aero. Like most of the players, he uses a customized version, making slight adjustments to its’ weight and balance.

Rafael Nadal’s racquet at the beginning of his career

At the beginning of his career, Nadal played with the Babolat Soft Drive. However, he soon started to use the Pure Drive during his early years in the game. The CEO of Babolat, Eric Babolat explained that they decided to build a racquet completely adapted to his game. Hence the racquet was designed to generate more power and spin.

This is how the unique Babolat Aeropro Drive (now Pure Aero) racquet was born. It was designed with the technical collaboration of players and the Babolat’s research and development team in 2004.

The first adjustment in Rafael Nadal’s racquet took place in 2012. Nadal was going through a rough time as he was emerging from a difficult season with a series of defeats against Novak Djokovic. In an attempt to end the streak, the Mallorcan added 3 grams, which would help him to put “more” spin and power on the ball.

How many racquets does Nadal use in a year?

Nadal doesn’t use too many racquets in a season. He uses a maximum of thirty racquets per year. It can also be noted that the 19-time Grand Slam champion is one of the few players in the world who can claim to never have broken a racquet voluntarily. 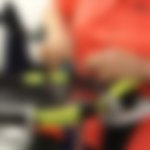 “On average, Rafa is given 6-8 racquets four times a year,” said Jean-Christophe Verborg, director of global sports marketing at Babolat. Nadal uses these 6-8 frames until the grips begin to mold to the shape of his hand and this is when he gets the best feeling. “Especially for Rafa who, because of his rather unique grip, it’s important for him to work the grip until it is perfectly adapted to his hand,” Jean-Christophe added.

Nadal plays with the Pure Aero racquet, which is equipped with microsensors attached in it. This microsensor helps to collect important data – the number of shots, area of impact, power, effect and more. These data are useful to his team in practice and getting useful insights of the match.

Rafael Nadal’s racquets specifications as of 2021

Through the years, we stood by his side and still do, that's why we are excited to unite with another of @RafaelNadal 's long-standing partners, @Kia_Worldwide on his journey in Australia.#Kia #Babolat #Movement #VamosRafa #Inspiration #RafaelNadal #MovementThatInspires pic.twitter.com/sN8k3McUGn