Valorant by Riot Games swept the world aside with its arrival. The closed-beta overtook almost every other game when it comes to viewership on Twitch. Riot claims that their superior anti-cheating policy is top of the line. However, the kernel level (vgk.sys) is spurring debates all across the gaming community.

Valorant anti-cheat starts upon computer boot and runs all the time, even when you don’t play the game from pcgaming

The Vanguard anti-cheat system starts up only while Valorant is running on your computer. Riot reassures us that the kernel driver starts up with your system, but it does not invade your privacy. Security experts are trying their best to understand whether that statement holds any water or not. Riot claimed that the outdated anti-cheating systems give the cheaters a lot of scopes to infiltrate. The question remains, is the new anti-cheat system safe?

What Are The Primary Concerns?

The concern from Riot Games to stop hackers and cheaters can be evident from their approach. The trick over here is to design an anti-cheating system that would look like a kernel-level-program to the cheaters—something which would invariably restrict changes. Vanguard focuses on bridging the gap between the minute programming disadvantages which code-breakers exploit. Riot Games have made it an absolute compulsion for the vgk.sys to run. 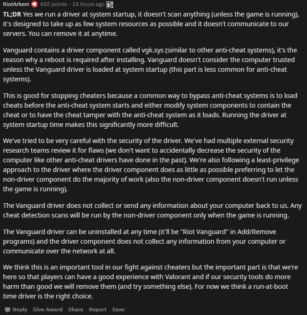 Riot anti-cheat head Paul Chamberlain insists that the best way to stop cheaters who base their work around kernel-level is by developing anti-cheat on the same level. This invariably makes the cheat challenging to create, and it also becomes difficult for ordinary people to use. Thus monetizing factor is taken out of it. Paul also claimed that no anti-cheat software could act as a fortress. Eventually, they will be breached. For now, Vanguard stands as one of the best anti-cheat systems out there.

The exact working of the Vanguard system explained by the game developers revealed a few things to us. We might think at the first go that this is going to be intrusive. Upon further inspection, we realize that it is not as dangerous as that. First thing first, it is entirely upon us; we can remove the driver. The driver only runs if the game is on. Paul Chamberlain declares that the driver “does not collect or send any information about your computer back to us.”

We can only wait patiently and let things unfold. Hopefully, the claim that Paul Chamberlain is diplomatically avoiding the real issues about the anti-cheat system being invasive is false. Only time will tell.