Swiss Maestro Roger Federer is known around the world for his incredible shot-making ability. He plays so many amazing shots that are rarely ever played by other players. Nick Kyrgios is one of those players and a recent post by Tennis TV showcased how he learnt those shots from Federer.

As you can see in the above post, Tennis TV showcased the unconventional shots that are being played by Roger Federer and Nick Kyrgios. There are so many shots like the SABR and the tweener that have been mastered by both players. The Australian obviously saw this and responded. Check out what he said.

After seeing Tennis TV’s post, Kyrgios used his Instagram story to write his response. In this response, he talked about Federer and he also gave his opinion on one of the biggest debates in tennis. He said, “Federer is the GOAT. I am just a flash who likes to have some fun.” 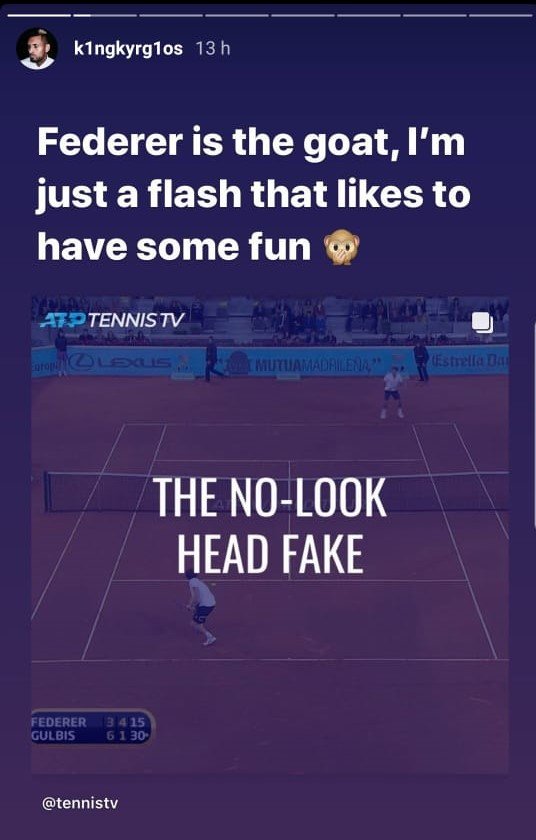 The GOAT debate is one of the biggest debates in the sport of tennis. Many people like Kyrgios have sided with Federer while others have sided with his rivals Rafael Nadal and Novak Djokovic. However, the GOAT will only be decided by one record – the most Grand Slams.

The Swiss Maestro currently holds this record with 20 but his rivals are getting very close. In fact, Rafa is just 1 slam away from equaling the record which is why Roger will be looking to extend his lead. Sadly, he is not going to be able to do it this year.

Recently, the Swiss announced that he was ending his 2020 season as he underwent a second knee surgery. He hopes to be at 100% when the 2021 season kicks off and hopefully, we will see him winning some Grand Slams like he did in 2017.