The world has seen some of the finest tennis players over the ages. Few of them went on to become legends of the game. But what if, all the great qualities from each of these athletes could be combined to develop an even greater player? Well, such a thing is not biologically possible. That we are certain of. But we can choose each player’s best qualities. Rafael Nadal would be one of them without a doubt. At least, his uncle and former coach, Toni Nadal recently chose some of his abilities, alongside those of Roger Federer and Novak Djokovic’s. 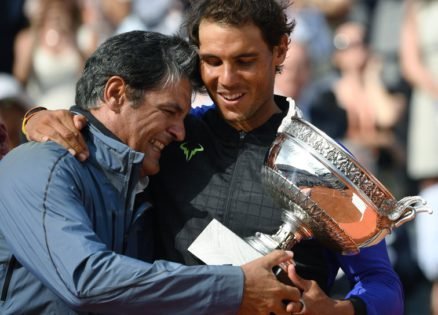 In an interview with ESPN Tenis, Toni was asked to choose players who are the best in the different categories provided. The video of the interview was later shared on Twitter with a caption that read, “A real treat! Toni Nadal put together his ideal player in a heads-up interview with #ESPNTenis. What do you think of the choice of Spanish?”

(Note: The caption was originally written in Spanish. We later translated it using Google’s translating services.)

As per the 59-year old’s opinion, a perfect player should have the serving abilities and volleying skills of Roger Federer; movement and forehand of both, Federer and Nadal. He chose Novak Djokovic for his backhand. As far as mental toughness is concerned, Toni believes Nadal and Djokovic can outplay anyone else.

Back in 2017, Toni and Rafael Nadal parted ways, as player and coach, after spending most of the latter’s career together. After quitting as Rafa’s coach, Toni instead took charge of his nephew’s tennis academy in Manacor, Spain.

Back in June, the 19-time Grand Slam winner’s uncle revealed that Rafael never paid him for coaching. As a result of that, Toni had full independence in deciding Rafa’s training regime and other sports-related matters. In his words, it helped him get freedom in terms of expression.

Toni has always been vocal about his nephew’s talent and indomitable willingness to learn. The 34-year old Spaniard is on the brink of equalling Federer’s record tally of 20 Grand Slams. It remains to be seen if Rafael would participate at the US Open. However, he is one of the hot favorites to win the Rolland Garros event, due in September.