Samoa Joe gave a big hint this week to the WWE Universe on Monday Night RAW. He almost made his return to the squared circle.

The Samoan submission machine is probably the most unlucky wrestler in pro wrestling history. In his two-decades-long career, Joe has been injured several times and hence has always been short of fulfilling his potential.

It has been a year since we last saw Samoa Joe in the WWE ring. Joe was last seen in a semi-final match in a losing effort against Baron Corbin at the 2019 King of the Ring tournament.

Post then, Samoa Joe was reported to have a thumb injury. As a result, Joe was made a part of the commentary team. 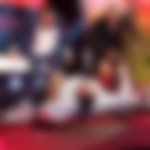 In February, Joe was suspended for violating WWE’s wellness policy. However, he did return in April but again as a commentator.

On the latest edition of RAW, Seth Rollins walked out to answer Dominik’s challenge. However, Rollins turned his attention to broadcaster Tom Phillips for cheering Dominik’s assault previous week.

As Rollins planned on sacrificing Phillips, Joe intervened to make the save. However, instead of Joe’s return, this served as a distraction for another Dominik assault on Rollins.

However, this blink of a return has got the WWE Universe buzzing.

Here are a few twitter reactions by WWE fans.

I’m gonna need a WWE title run for Samoa Joe once he’s cleared. This man is way too much of a badass to not have at least one.

Samoa Joe is so great

Samoa Joe is so good going from #Raw broadcaster to bad ass killer like a light switch.

Samoa Joe has one of the best promo deliveries in the game. I just love how he points his finger in Murphy’s face w/o even looking at him..pic.twitter.com/dHq3pNZUQh

I believe everything Samoa Joe says all the time

It took 2 minutes for Seth Rollins and Samoa Joe to completely sell me on a full feud between them?

Those guys have some serious skills #WWERaw

Samoa Joe is one of the best ever. There I said it.

The nuances in his tone and delivery of this little segment, he’s incredible. pic.twitter.com/hdc7wIEqPw

Joe returning to the ring can be great for the company. Joe’s brilliance in the ring and realistic promo skills cannot be ignored.

Interestingly, there are rumors flying around that Vince McMahon is happy with Joe at the commentary table. It will be interesting to see what plans WWE have for him.