8 Serena records only Serena can beat!

Serena Williams, ever since she bagged her 22nd Grand Slam title at Wimbledon 2016 has vowed to break Margaret Court’s world record of 24 Grand Slam titles, a feat only the American has achieved in the Open Era. While Martina holds among the most prestigious of records, Serena Williams is no less herself, having racked up next-to-impossible achievements, which it seems, only she can beat.

She’s remarkably the only player in the history of tennis to accomplish Golden Career Grand Slam in both, doubles and singles. While many legendary players have completed the feat in singles, only the American has done so, along with her sister.

After dropping to a rank of 145 in 2010, Serena attempted a successful comeback in 2013, nearly after 3 years to become the world’s oldest no.1 at the age of 31 years and 145 days. She announced her return with a series of titles and Olympics wins.

3.  She has the most Grand Slam titles in the Open Era.

After her win over Angelique Kerber, Williams equalled Steffi Graff’s world record of 22 Grand Slam titles, marking her as the most successful womens’ tennis player in the Open Era.

4.  She’s the most decorated tennis player with 4 Olympic Gold Medals.

5.  She became the oldest player to win the Championship at 34.

Only Martina Navratilova comes close to being the 2nd oldest player to win the trophy in Britain when she won it, aged 33 years and 122 days. It is interesting to note how Williams is getting with her age, as opposed to former world no. 1 players.

6.  She’s the first African-American to win a Grand Slam in Australia.

In terms of prize money, Serena Williams is the highest earning woman athlete in the entire world. Across all sports, she’s bagged nearly $80,157,395. 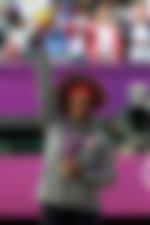 After her 2012 London Olympics Gold Medal, Serena went on wining the next few Grand Slams, namely US Open’14 and Wimbledon’15, keeping her mastery on the tag for the oldest woman to accomplish such a feat.