Tyson Fury Is Not 100% Ahead of the Deontay Wilder Rematch

Simona Halep faced Elena Rybakina in the final of the WTA Dubai Duty Free Tennis Championships. The pair have played one another on just one other occasion, which Simona won.

Rybakina is the WTA World No. 19 from Kazakhstan, while Simona is ranked World No. 2.

The World No. 2 Simona Halep continued her trend of coming back from a set down to force a deciding third set in the event this year. Halep won her second trophy in Dubai, beating Rybakina 3-6, 6-3, 7-6(5).

Elena started the match off with her service game, holding well after a bit of fight from Halep. Halep, unlike her last two matches, started well too.

Both players held serve until the sixth game. Halep was leading 40-15, but allowed her opponent to get back to deuce. Rybakina took the very first break point to take the lead.

Halep and Rybakina both held their respective serves comfortably therein, until the final game. Serving to take the opening set, Elena played quite a nervy game. Unable to get much rhythm on her serve, she found herself in a very tight game.

She could not taker her first set point, allowing Halep to make it to deuce. After another failed set point, it was Simona who got a couple of break points. Elena served well under pressure though, as she closed out the set 6-3. 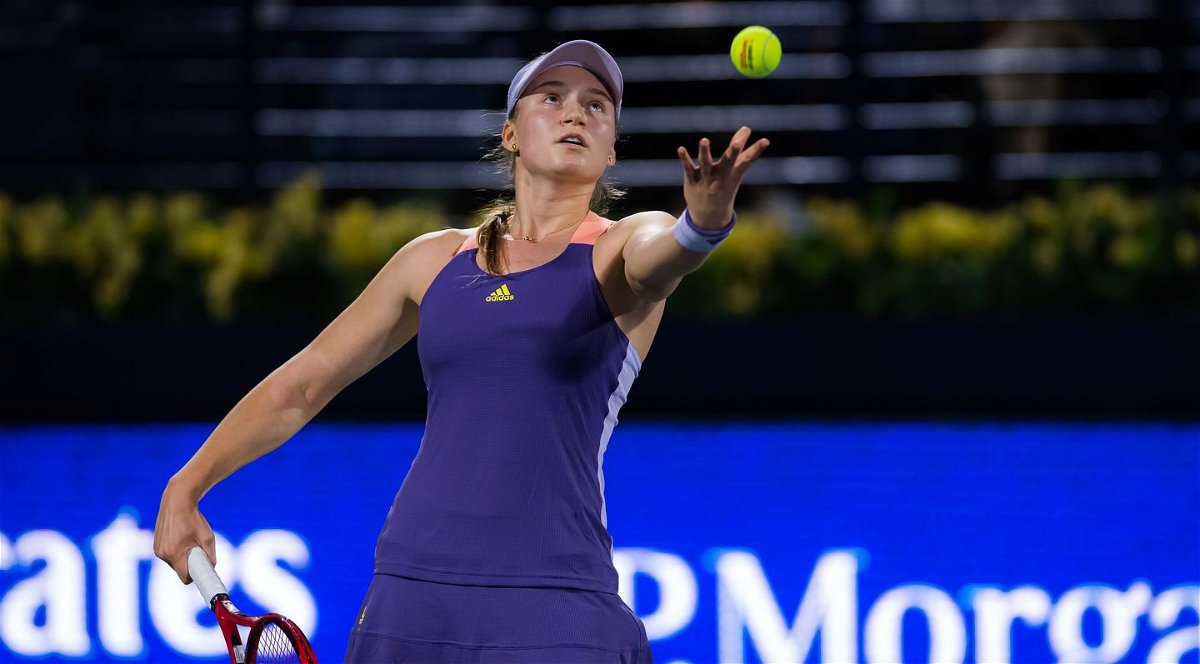 Halep got the second set going with her service. She managed a first serve all through the game. However she still found herself in a dogfight. Elena even got a break point at 30-40, but Halep managed o save it and take the game.

Rybakina too managed to hold her first service game with a cool down the line winner, despite a bit of a fight by Simona.

At 2-1, Halep took the initiative, playing an aggressive game to give herself three break points. She needed just the one to get her break.

The break of service seemed to have deflated Rybakina as she hit a slew of unforced errors in a meek game, allowing Halep three game points. But she fought back from 0-40 to deuce, getting her confidence back.

However, Halep managed to hold with an ace to consolidate the break of serve.

However, the lead did not last too long as Elena played a superb game at 2-4 down to break her opponent to love, to restore parity.

Receiving at 3-4, Halep gave herself half a chance with a beautiful passing shot to make it 30-30. An unforced error by Elena gave Halep the chance to break back immediately, but the Romanian floundered it with a poor slice in the net.

Halep hit another beauty of a passing shot to get a second break point, but Elena constructed a nice point under pressure to force another deuce.  After losing two game points, Elena served a double fault to give Halep a third break point in the game.

Now on the 9th minute mark of the game-duration, the game carried on with another deuce, followed by another break point. A ground stroke hit long by Elena finally gave Halep the break back. She only needed to hold her serve now at 5-3, to level the match.

She did so with aplomb, displaying her famed defensive prowess in the game to take the set 6-3. The match was now into the deciding set.

The pair played a couple of solid opening games and managed to hold. Serving at 1-1, Rybakina took a good lead of 30-0. But a couple of poor points, with a poor smash attempt in the net, she gave Halep a chance at 30-30.

Deuce followed, but Rybakina held her nerve, and her serve.

The first break point of the set occurred with Halep serving at 1-2, 30-40. Rybakina grabbed the opportunity with both hands and took the lead.

But as they say, you are at your vulnerable most right after a break.

Halep immediately had her chance with a little help from Elena’s double fault at 30-15. She broke right back to restore parity in the set and go on serve at 2-3. Three solid service games followed, keeping the third set in the balance at 4-4.

At 5-5, Halep mounted her attack on Elena’s serve, to give herself a break point. A wide down the line backhand gave Simona the break and the chance to serve out the match at 6-5.

But Rybakina was not about to roll over easily. She took a 0-30 lead on a couple of second serves by Halep to keep the pressure on. Another good passing shot at 15-30 by Halep made it 30-30, followed by a backhand winner by Rybakina to giver her a break point.

She could not take the break despite being in control of the rally. A 132 km/h return winner gave Elena another crack at it. Helped by a meek second serve by Halep, Elena was back in the match, forcing a tie break.

Simona Halep takes the tie break and the match

The tie breaker was started off by Elena. Halep hit a poor wide forehand to give her opponent the lead. But two first serves on the following points made it 2-1 to Simona.

The Romanian hardly troubled Elena on her serve, hitting two long ground strokes. The tie break was strewn with unforced errors as the players swapped sides at 3-3.

Rybakina absolutely hit through her return on Halep’s second serve to get the first mini-break of the breaker. Halep, however, fought right back to restore parity again at 4-4, with a commanding rally and a winner.

A couple of unforced errors by Elena meant she was now serving to stay in the match at 5-6 in the tie break. A cautious rally by both players followed, until Rybakina hit a wide backhand to give Simona Halep her second WTA Dubai Open title.

WTA Rankings Scenario After 5-Week Suspension – Sofia Kenin to Climb up to No.3