Second-seed Stan Wawrinka was sent packing out of the Aegon Championship’s second round by big-serving South African, Kevin Anderson – 7-6(4), 7-6(11)  in an intriguing encounter at the Queen’s club. Wawrinka, who recently lifted his first French Open title, saw his Wimbledon preparations haywire in straight sets to the South African.

The Swiss, who seemed like a possible candidate for the trophy at Wimbledon, will definitely rue the few chances that went begging on a pleasant day in West London.

Anderson needed the tie-break in both the sets as he fired 22 aces for his morale-boosting victory. First set was wrapped up with some big serves and second had a bit of tussle coming from both ends. The lanky South African wasted five match points and  won the match with a terrific ace.

Meanwhile, Stan Wawrinka didn’t seem very confident as he had plenty unforced errors to his name. Though he saved five match points in the second set, he himself blew three chances to seal the set. One particular chance that didn’t go his way was when he missed an extremely simple forehand to seal the set. 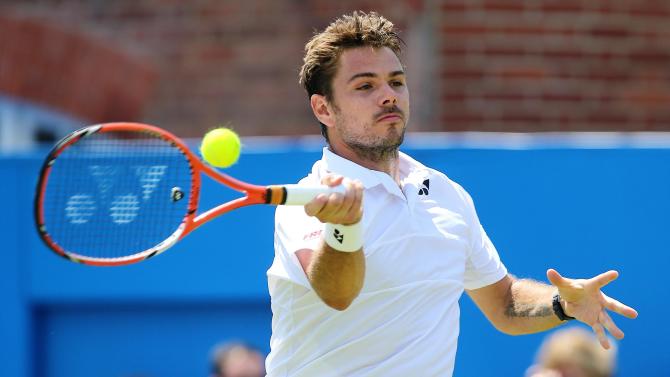 “It was a terrific match for me,” the victorious Anderson said. “He’s a terrific player so it means a lot to me and to do on such a great court makes it extra special.

“My serve was a big plus right from the beginning. Stan also has a good serve but I was able to return pretty well.”

Anderson will next face either Guillermo Garcia-Lopez or Alexandr Dolgopolov, the man who shocked 2008 champion Rafael Nadal in the opening round.