“When I die, don’t bring me to hospital, bring me to Anfield. I was born there, and so I will die there.”

The KOP favorite, Mr.Liverpool are the apt descriptions for a player who has served this institution selflessly putting club and team mates above himself. Steven Gerrard, a midfield legend, has finally decided to part ways with the most decorated club in the English football history. Steven Gerrard is a great leader, strong in tackle, with good vision, who can hit the ball at a ferocious speed, the one who scores great goals and makes brilliant passes, or simply, has it all. There is no doubt that Stevie G ranks among the elite of Liverpool FC, right at the top with the likes of Billy Liddell, Ian Rush and Kenny Dalglish.

17 years: it has been really a long journey for one of the most loyal and consistent performers of all time. Liverpool’s scouts spotted Gerrard at an age of eight years. He faced difficulties during the beginning of his career because of his height, but the academy worked really hard on the young talent. Gerrard got into the Liverpool team in 1998 when Jamie Redknapp got injured. New manager Gérard Houllier had inherited the key player to his Anfield revolution. Gerrard played 13 games, but his physical condition was still restricting his progress. The first instance that convinced Liverpool fans worldwide that the boy was something special was a heroic display in his first Merseyside derby in only his ninth appearance for the club. He featured as a right-back and made two goal-line clearances as Liverpool successfully protected their lead. Finally the England set-up took notice of the young boy. He was nominated for captaining the u-18 side and made his debut for the u-21 in September 1999. Houllier trusted the 19-year-old to begin the 1999/00 season in the starting lineup alongside Redknapp and promised him at least 20 games. Didi Hamann took his place eight games into the campaign in the Merseyside derby and a disappointed Gerrard came on as a substitute. He lost his composure at the end of the match and was sent off for an ugly foul and was banned for three games. Gerrard returned stronger than before, determined to prove himself and his first goal for the club against Sheffield on 5 December 1999, proved to be spectacular. The boy had surely come far in a short period of time and his career rose rapidly in the 2000/01 season. He made 50 appearances for Liverpool, won the League Cup and FA Cup and scored a goal, which he ranks as one of his most memorable ones, in the brilliant 5-4 win over Alaves in the UEFA Cup final. Gerrard was named Professional Footballers Association’s Young Player of the Year. Liverpool, under the guidance of Houllier, continued to progress in the League and finished second in the 2001/02 season, seven points behind Arsenal. Liverpool completed the cup treble that season, with Gerrard being the most influential young player in the squad.

Gerrard’s influence continued to grow, and on 15th October 2003, he was made the captain of Liverpool Football Club, succeeding Sammi Hyppia, a dream come true for the boyhood Red: “I was captain of my school side and I used to go along to Anfield to watch the team. I used to watch Barnes with the captain’s armband and dream that one day it would be me captaining the team I love.”

Next Up, came the period when he earned the tag of LEGEND, the period of 2004 to 2006, when Liverpool, under Rafa Benetiz and captaincy of Gerrard won the FA Cup, UEFA Champions League and came second in the league cup, losing the finals against Chelsea.

He returned to score in the last five minutes of a Champions League group stage match against Olympiakos to secure Liverpool’s advancement into the knockout round. He claimed that this was his most important, if not his best goal for Liverpool till date. On the final night, during a six-minute stretch into the second half of the 2005 CL final against AC Milan, Liverpool came back from a three-goal deficit to tie the match at 3–3 after extra time, with Gerrard opening the scoring for Liverpool. Liverpool’s third goal was gained as a penalty from a foul awarded to Liverpool when Gattuso was judged to have pulled down Gerrard in Milan’s penalty box. Gerrard did not participate in the penalty shootout (he was the designated fifth penalty taker) which Liverpool won 3–2 as they claimed their first Champions League trophy in twenty years. Dubbed the Miracle of Istanbul, the match is widely regarded as one of the greatest finals in the competition’s history, and Gerrard was lauded as the catalyst for the second half comeback. Gerrard was named the Man of the Match, and later received the UEFA club Footballer of the Year award. Gerrard scored 20+ goals for Liverpool for the first time in the 2005/06 season and it was real  “Roy of the Rovers” stuff for him when Liverpool faced West Ham in the 2006 FA Cup final. He scored with a stunning volley in the 54th minute to make it 2-2 and when West Ham seemed certain to lift the cup, being 3-2 up with time running out, he scored from a long way out, as he later said his feet could not carry him any further; an incredibly audacious effort by the captain. Liverpool won the FA Cup after a penalty shoot-out.

Gerrard stayed loyal during this course, he rejected £100,000-a-week offer from Chelsea and signed a four year contract. He continued to be an influential player for Liverpool in both 2007/08 and 2008/09 seasons. He added another 45 goals to his tally during this time. The 2010/11 period wasn’t a successful one for Gerrard as he suffered a groin injury. Rafa left and Liverpool were somewhere in the middle of the table. A shoulder injury and the subsequent surgery on it prevented Gerrard from playing in every Premier League match in 2012/13. Despite missing the last two League matches against Fulham and Queens Park Rangers, he still made more first-team appearances than any other player. Ten goals was a respectable total for the season, the first time he had achieved double figures since 2009/10, starting the 2013/14 season with only two goals away from completing a century in the Premier League. Gerrard did complete his 100th league goal for the club against Newcastle on 19th October 13,

Season 13/14 was the season in which we saw the vintage Liverpool side. Luis Suarez made the fans dream of the Premier League title and they should have actually bagged it, with that being the only trophy not in Gerrard’s cabinet. Gerrard broke down after the game against Manchester City after winning it 3-2. On 27th April, Gerrard was involved in what was later labelled as a defining moment of the 13-14  PL season. Liverpool was on the top when they faced Chelsea in their third last match of the season. Gerrard slipped while receiving a pass which allowed Demba ba to score the opening goal for Chelsea, which later went on to win 2–0, and it meant that Liverpool’s title hopes were no longer in their own hands. Gerrard would later refer to this period as: “the worst three months of my life”.

It has been a roller coaster ride for this legend. Being a Red, I simply know what it feels like not being able to see your favorite player, your reason to start watching football, for your favorite club. Everyone is gutted with this decision but as the anthem says, WALK ON! WITH HOPE IN YOUR HEART AND YOU’LL NEVER WALK ALONE.

Some of his laurels include :

He has made 696 appearances for the club, with 180+ goals and countless great performances. 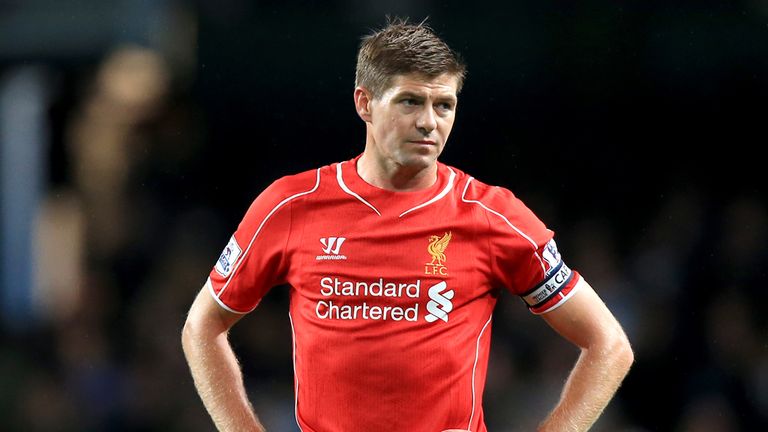 Will end this tribute with one of the best quotes on Gerrard:
“He is without doubt the greatest player I have ever played with, he has everything. At Liverpool, he is irreplaceable.”
-By Torres