The weekend did not look good for the constructor, Scuderia Ferrari. They were already facing difficulties to keep up the pace against other competitors.

The qualifying resulted in Sebastian Vettel finishing last in the Q3 i.e, 10th. On the other hand, Charles Leclerc finished 11th. Eventually, he received a three-place grid penalty for impeding Daniil Kvyat. Hence, started from P14.

The race day was undoubtedly going to be tough for both the drivers and the constructor. It went from bad to worse when Charles Leclerc crashed into his teammate in the opening seconds of the race itself. The weekend couldn’t have been worse for the Tifosi.

Charles Leclerc and Sebastian Vettel out of the Styrian Grand Prix

Scuderia Ferrari had an unbelievable weekend at the season opener with the young Charles Leclerc finding himself on the podium at P2.

The situation with Sebastian Vettel was already sour as he could only salvage a single point last week. Over the weekend the German revealed that he has a lot to prove. He had the spark and is willing to fight for every possible opportunity.

However, the race did not go as well as he would have wanted it to progress.

Suffering a dreadful start, he was passed by Sergio Perez, who was at P11 at the Turn 1. However, he was trying to keep calm when he was abruptly and forcefully benched by his teammate, who came from behind and hit the back of his car.

This resulted in the early retirement for both the Ferrari drivers topping an already dismal weekend. 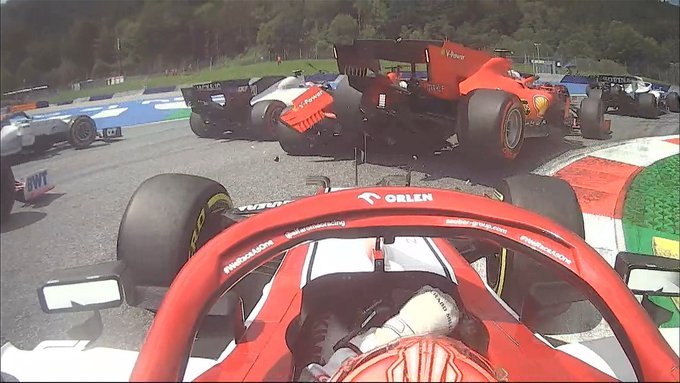 For what it’s worth, the Monegasque driver soon accepted his mistake over the radio. Speaking to Canal + after the race He was heard saying :

The driver seemed to be annoyed with himself as there was no space left at turn three during the incident. Charles Leclerc finished 2nd on the podium last weekend and surely did not expect such a result for the second edition of the race.

He said, “I apologized. Excuses are not enough at times like this. I’m disappointed in myself and let the team down. I am sorry even though it’s not enough. We don’t need that, the team doesn’t need that and I’ve put all the plans of the team in the bin.”

We hope that the prancing horses find their way back to glory and wish Charles Leclerc and Sebastian Vettel, a very successful season ahead.