WATCH: Devs Explain The Last of Us 2 Gameplay

A good, enthusiastic community, strong in numbers, is the lifeblood of a Battle Royale game. Without enough players, a game in this genre isn’t going to live for long. Fortnite Battle Royale remains one of the most popular video games, period.

Naturally, you would never expect Fortnite, of all games, to have any issues in filling up a match with players. And you’d be right, they encounter no trouble filling up a match; except, it isn’t always done with real human players.

If you’re a Fortnite regular, you know all about the Skill Based Matchmaking (SBMM) debate raging around the game. Is it there, is it not there? Should it be there, should it not? This conversation is never going to be a one-sided affair.

So, instead, let’s talk about an issue in the game that is surely eating away at the entertainment factor.

We are talking about bots, of course.

Epic Games tested the waters a couple of weeks ago by removing SBMM from the Squads mode. Soon after, however, the community suspected it was incorporated back into the mode. Many users observed a significant surge in the competitive aspect of Squads mode, which, of course, hinted at SBMM.

But others raised the question of whether this was the consequence of another change rather than re-introduction of SBMM. Perhaps, many said, Epic had simply reduced the number of bots in the game. 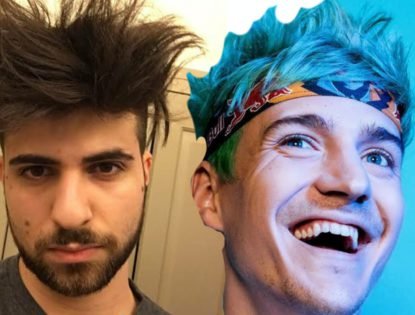 In a recent broadcast, while Ninja, SypherPK, CouRage, and TimTheTatman were playing Fortnite Battle Royale, the blue-haired streamer revealed something interesting.

Apparently, Sypher acquired software from one of his friends that exposed the bot issue. The program enabled Sypher to check how many bots were in one of his games. Turns out, the game had 89 bots and just 11 human players!

Soon after he revealed this to the public, people suspected that Epic brought back SBMM to rectify that issue. Many started blaming Sypher for this.

Ninja mocked this blame-game insinuated by the community by sarcastically screaming “fuck Sypher” a few times. His explanation of the incident tells you exactly why it is absurd to blame Sypher for it.

He laid out the discussion the two had about it.

“We talked about it and said it was kind of a joke. And talked about, you know, better, more healthy lobbies.

“And Epic, like 2-3 days later, obviously removed the fact that you can’t match 91 bots in a game, and everyone thought it was Sypher’s fault.”

We may not always agree with Ninja, especially when he is on one of his infamous rants, but you have to say he hits the nail on the head here. SypherPK simply exposed a glaring issue in the game. Epic promptly removed the excessive bots from the game, but people started blaming him, believing he had compelled Epic to bring SBMM back.

But, as Ninja says, “Sypher you ruined Fortnite!”

Fortnite Glitch Lets You Drive the Battle Bus Into Galactus