Born on December 30, 1990, the Italian tennis player, Camila Giorgi is known for her aggressive style of game and her hard-hitting. She is one of the powerful flat hitters on Tour and won over former World Number ones Caroline Wozniacki, Maria Sharapova, and Victoria Azarenka during the WTA tournaments.

Camila Giorgi turned a professional in the year 2006 and all her life she has been training under her father, Sergio Giorgi. When Giorgi was five years old, 1976 French Open champion Adriano Panatta said, "it's the first time I play a girl who plays like Andre Agassi."

In 2014, Camila Giorgi reached the finals at BNP Paribas Katowice Open and Wuhan Open. The following year she claimed her first WTA Tour title at the Topshelf Open in Rosmalen, Netherlands. She defeated home favorite Kiki Bertens in the semifinals and Belinda Bencic in the finals. 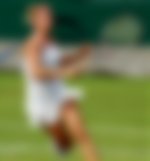 Her run on the grass courts was pretty decent relative to the other surfaces. Camila Giorgi breezed in the quarterfinals of Wimbledon 2018. In the quarterfinals, she pulled off the opening set against Serena Williams.

Later that year, she claimed the Linz Open title by beating Ekaterina Alexandrova in the final and dwelled on a career-high ranking of World Number 26.

She has two WTA singles titles, in Hertogenbosch and Linz.

Giorgi's form was quite up and down in 2020. Currently, she is ranked no. 76 in the WTA rankings.

Giorgi uses Babolat racquets and also has an endorsement with Can-Pack.

Giorgi wears her own designs on the court. The Italian’s unique and fun outfits are not branded with its own logo. Camila and her mom started a business together and thus officially launch a tennis line.