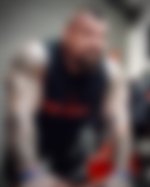 Hall was expected to make his boxing debut against Hafthor Bjornsson in September 2021. However, he had to pull out of his fight due to an unexpected bicep injury.

As per reports, Hall's boxing match against Hafthor Bjornsson is now being targeted for the end of March 2022. As of 2021, Hall has never fought in a boxing match. Thus, his boxing record stands at 0-0.

As of 2021, Eddie Hall’s net worth is estimated to be $5 million, according to 888sport.com. The major sources of his income are the Strongest Man competitions and endorsement deals.

In 2019, Hall helped a 14-year-old named James Rimmer raise funds for a business project, 'Home Teddies.' Rimmer decided with every teddy bear sold by 'Home Teddies,' a proportion would be donated to the Leicester Children’s Hospital Appeal.

In 2012, Hall competed in a charity boxing match. Now, he is aiming to do the same in his potential boxing match against Hafthor Bjornsson. He wants to introduce a wager where the loser of their fight would have to donate $100,000 to a charity.