2007 World Champion Kimi Raikkonen is arguably the most popular Formula 1 driver. His straight-talking, no-nonsense attitude has a fanbase of its own in the F1 circuit. Kimi’s nonchalant style and outlook towards racing and life have earned him the moniker of ‘Iceman’ among fans and experts alike.

The Finn made his Formula One debut back in 2001, along with Fernando Alonso and Juan Pablo Montoya. He raced for Sauber in his maiden season before jumping ship to McLaren. He would remain with the team until 2006 and moved to Ferrari a year later.

Kimi Raikkonen tried his hand at rallying for a brief period before returning to F1 in 2o12. Raikkonen spent two seasons at Lotus before rejoining Ferrari in 2014.

After 5 seasons at the Scuderia, Kimi moved on to Alfa Romeo. The Iceman had come full circle. 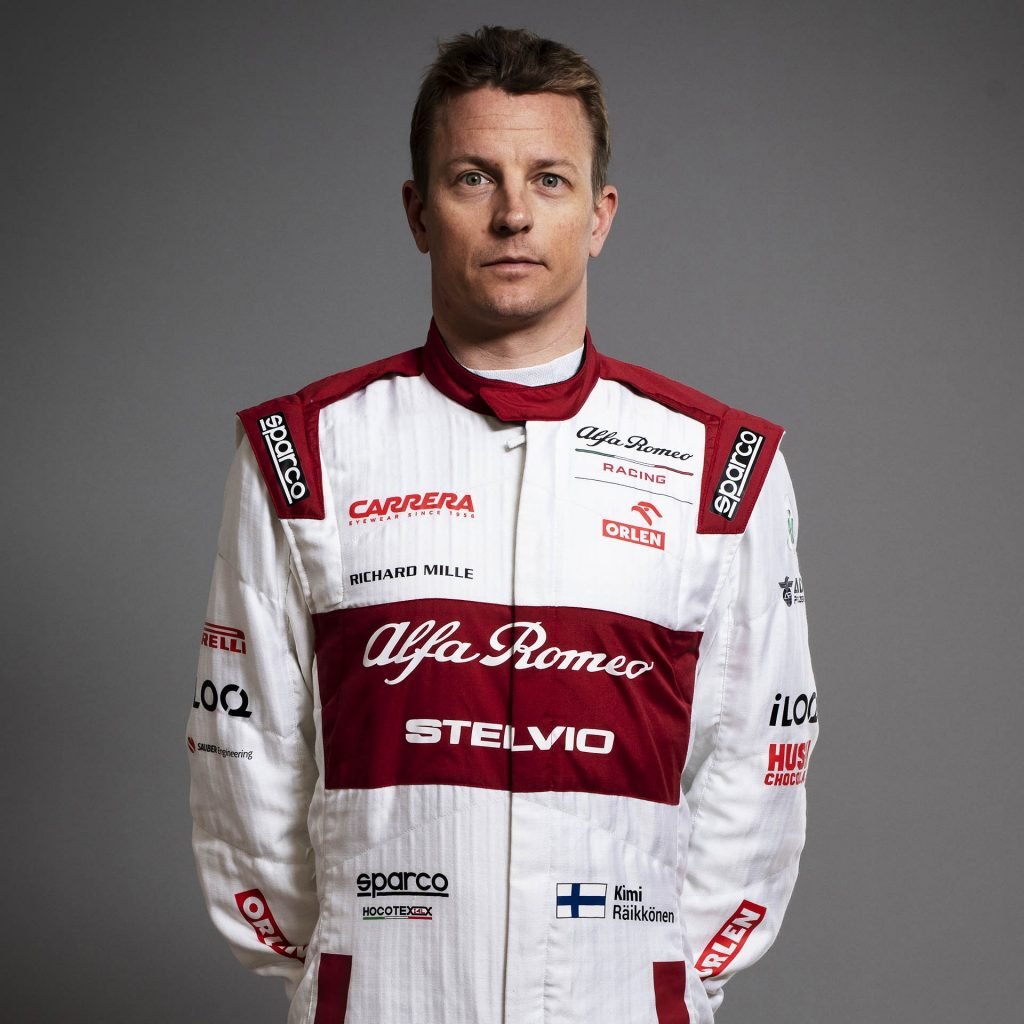 The veteran driver scored his first podium in his very first race for McLaren. A win came his way a year later at the Malaysian Grand Prix. In 16 seasons, Raikkonen has finished in the Top-5 at least 10 times.

Finally, his moment of glory came in 2007 when he took advantage of the warring duo of Fernando Alonso and Lewis Hamilton. His win streak dried up after the 2013 Australian Grand Prix. But he broke that jinx at the 2018 US Grand Prix.

In a career spanning nearly 2 decades, Raikkonen picked up 21 wins and 103 podiums. Kimi Raikkonen is on target to become Formula 1’s most experienced driver with over 300 race starts.

He currently races for the Alfa Romeo team, even at the age of 40.

When Raikkonen signed for Ferrari for the second time, he limited his personal endorsement opportunities. However, he has been sponsored by the likes of Oakley and Wrangler.

In late 2019, Raikkonen teamed up with American brand West Coast Choppers to launch his own clothing line called – ‘Kimi’.

Being the Iceman, Kimi Raikkonen isn’t exactly a very “chatty” personality. He likes to do his job and get on with life. As a result, he isn’t the most engaging or “open” driver in F1. But that is slowly changing.

In late 2017, Kimi finally joined social media to connect with fans and express himself. He has an official Instagram account where he usually posts a variety of things in and out of the F1 world.

Passionate fans can connect with Raikkonen via his Instagram.

Sadly, Kimi has no other social media platforms (Twitter or Facebook). But you never know, Kimi may just widen his social media presence in the future.

The majority of rich and successful F1 drivers tend to choose Monaco as their official residence because of the “amazing views” but Kimi isn’t one of them.

The Iceman has two residences – one in his native Finland while the other is in Switzerland. However, Raikkonen tends to spend a great deal of time in his luxurious house in Baar, Switzerland.

READ MORE-Where Does Kimi Raikkonen Live? All the Details About His Luxurious House in Switzerland 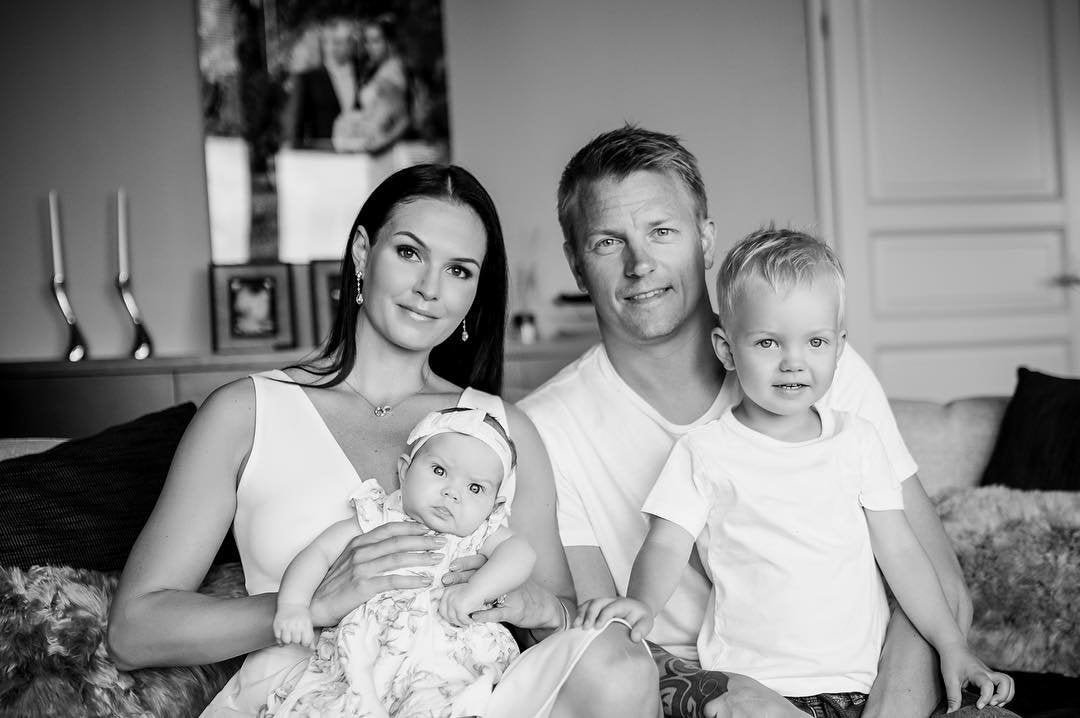 Kimi Raikkonen was notably in a relationship with the Finnish model, Jenni Dahlman. The pair were married for a decade before calling it quits in 2o14.

READ MORE- Kimi Raikkonen: Everything There is Know About His Wife, Mintu Raikkonen, His Children Robin and Rianna and More

Next, Kimi began dating Mintu Virtanen, a fitness model. In 2016, Kimi tied the knot once again, thus transitioning into a family man. They have two kids – Robin and Rianna.

In 2018, Kimi released his biography titled – “The Unknown Kimi Raikkonen”.

Raikkonen isn’t one to shy away from ink and has multiple tattoos. The most prominent one, however, is the easily recognizable “Iceman” tattoo on his forearm.

READ MORE- How Many Tattoos does Kimi Raikkonen have and What is the Story Behind Them?

READ MORE- Kimi Raikkonen’s Book: All the Secrets From the Finn’s Biography

He also has a host of hobbies such as motocross, snowboarding, and ice hockey.

Raikkonen is greatly involved in charity work but prefers to stay away from the limelight. The Iceman revealed that he never does good deeds with the aim of gaining publicity.

With Coronavirus bringing the world to a standstill and causing a multitude of problems, Kimi has been a big supporter of the ‘Save the Children’ fund.

Raikkonen often takes part in charity football matches alongside his fellow drivers. He and other drivers helped raise funds for Fondazione Telethon, an organization dedicated to cancer research.

Kimi Raikkonen is the most formidable driver on the grid. Besides being a world champion,…

Last weekend in Portugal, Kimi Raikkonen enjoyed one of the best race starts of his…

Former F1 champion Alain Prost has spoken about the difficulties of returning to the sport.…

Kimi Raikkonen has been driving in Formula 1 for as long as one can remember.…

VIDEO: Fed up With Questions on His Future, Kimi Raikkonen Walks Away From Interview

There were talks in the F1 world about Alfa Romeo’s 2021 drivers’ line up. It…

The drivers’ market is often an exciting but dangerous prospect to be dealing with. Williams’…

Mick Schumacher is the name that’s been on everyone’s lips for the past month. His…

Ever since Lewis Hamilton arrived in F1, he had that extra bit of radiance in…

After racing around the Nurburgring circuit on Sunday, Kimi Raikkonen and Antonio Giovinazzi got the…

323 career race starts, 1 Kimi Raikkonen. Even though he is technically the oldest driver on…

Following the culmination of the Eifel Grand Prix, Kimi Raikkonen became the record holder for…

11 races into what can be termed as a more promising season for Williams, the…

WATCH: Kimi Raikkonen Gets an Adorable Reception From His Kids at Home

The life of a Formula 1 racer is tough, traveling from one part of the…

Amidst all the hubbub of Lewis Hamilton’s record, there was one more driver celebrating a…

The German Grand Prix is all set to kick off at the famous Nurburgring circuit.…

The 40-year-old Kimi Raikkonen driving alongside 21-year-old Mick Schumacher, albeit temporarily, will be a combination…

“Unless You’re an A**, Kimi Gets Along With Everyone”- Vettel Backs Mick Schumacher-Raikkonen Team for ’21

Things are aligning perfectly for Alfa Romeo at the moment, as far as their drivers’…

The 6-time World Champion, Lewis Hamilton, has had to work hard in making his mark…

As Formula 1 is halfway through this season, it will only be a matter of…

Lewis Hamilton and Kimi Raikkonen are kingpins of the sport, having spent much time in…

Why is The F1 Race in Nürburgring Called the Eifel Grand Prix?

As the Formula 1 circus charts a course to Germany, most would have expected it…

Sebastian Vettel : “Was Clear I Was Left Out to Slow Down the Renaults”

Of the many drivers to have embraced this sport, Valtteri Bottas is quite a unique…

by Bhargav Gopal
Scroll To Top
PRESS ESC TO CLOSE