Omos 2022: Net Worth, Salary, and Endorsements

At 7 ft 3 inches, Omos is the tallest member of the WWE roster. He is the most intimidating presence in WWE and is a handy bodyguard to the 'Phenomenal' AJ Styles.

Omos signed a WWE contract in 2018 and made his debut at a house show in 2019, beating Ever-Rise in a handicap match. He made his television debut as a part of Akira Tozawa's band of ninjas. WWE promoted Omos from being part of the 27/7 championship tales to the doorman of Shane McMahon's Raw Underground.

After Raw Underground went bust, Omos became the bodyguard for Raw's AJ Styles. He and Styles have become an integral part of Raw, and he has played a huge part in Styles' matches.

At Survivor Series, he was christened Omos, a daunting name for a daunting superstar. He has gotten involved in many of Styles' matches. At TLC, he knocked the Miz off a ladder and prevented him from winning the WWE Championship. He eliminated Rey Mysterio and Big E from the 2021 Royal Rumble match even though he wasn't in the match. At the 2021 Elimination Chamber match, he ripped AJ Styles' pod cover from the outside to let him into the Chamber match early.

Perhaps, the biggest eat for the Nigerian became the Raw tag team champion alongside AJ Styles at WrestleMania 37 PPV. The duo dominated the tag division on Raw as they held on to the championship for 133 days before losing it to Randy Orton and Matt Riddle at the SummerSlam PPV.

However, the duo kept on teaming together and became arguably the most fearsome team on WWE.

The giant has an impressive net worth of over $1 million, a value sure to rise in the coming months. 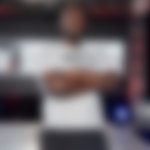 Omos hails from Lagos, Nigeria, but his family migrated to the United States when he was young. He attended high school in Florida and played basketball for the University of South Florida and Morgan State University. He played center for the Morgan State Bears from 2014 to 2015.