Ferrari driver Sebastian Vettel is a 4-time Formula One world champion. He is among the most likable personalities on the grid. He made his Formula One debut in 2007 in a one-off appearance as a replacement for an injured Robert Kubica. In the same year, he joined the Toro Rosso team, replacing Scott Speed. In 2008, he took his first victory, which still stands as the team’s only race victory. In 2009, he graduated to Red Bull F1 and stayed with the team until the end of 2014, before moving to Ferrari. His Red Bull stint saw him scale four back to back championships between 2010-2013.

Back in his Red Bull days, Sebastian Vettel’s helmet game was on another level. While the FIA has repealed its controversial helmet change rule, Vettel would turn up to Grand Prix events with some of the coolest lids on the grid.

Most recently, his iconic white helmet with the German stripes is easily recognizable and has become a classic helmet design on the grid.

His current contract with Ferrari puts his annual salary to $36 million along with bonuses, making him one of the richest drivers in the F1 grid. The length of his contract runs till the end of 2020 after which it is anybody’s guess. He’s driven for two very rich teams: Red Bull with their massive budget and Ferrari with their legacy, ensuring his lifetime earnings have crossed $500 million – $511 million to be precise, before 2019. 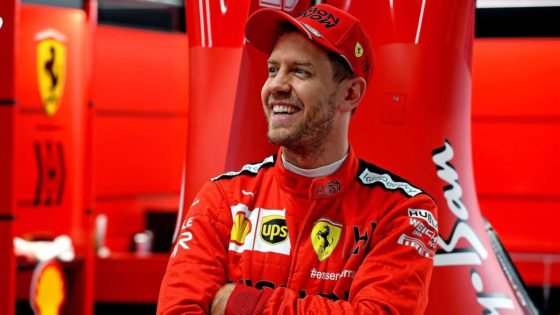 While he holds a long list of accolades in Formula 1, Sebastian Vettel is also one of the wittiest drivers on the grid. His perfectly timed quips and witty jabs during team radio messages and interviews have become a hit among the fans.

However, his Ferrari stint hasn’t been nearly as successful. Joining the team in early 2015, Vettel was the guiding light that Ferrari needed after a dismal 2014. One could argue that Vettel resurrected Ferrari in the turbo-hybrid era of Formula 1.

Despite getting off to a positive start, Sebastian’s Ferrari journey was full of ups and downs. He endured a difficult season in 2016 – scoring no wins and driving a car that wasn’t very competitive.

However, things changed in 2017.  the SF70h was more than a match for the Mercedes W08 and for the first time in the turbo-hybrid era, Ferrari could challenge Mercedes for the Championship.

While Ferrari and Vettel made good progress in the first half of 2017, the quest to end Mercedes domination fizzled out in the latter half of the season. Mercedes made a big step up in car development. Furthermore, a series of reliability issues and driver mistakes effectively ended the Scuderia’s hopes of Championship that year.

But the team went back to the drawing board of developed a monster of a car for the 2018 season. The SF71h seemed destined to put an end to Mercedes’s winning streak but a sequence of driver errors meant it was not to be. 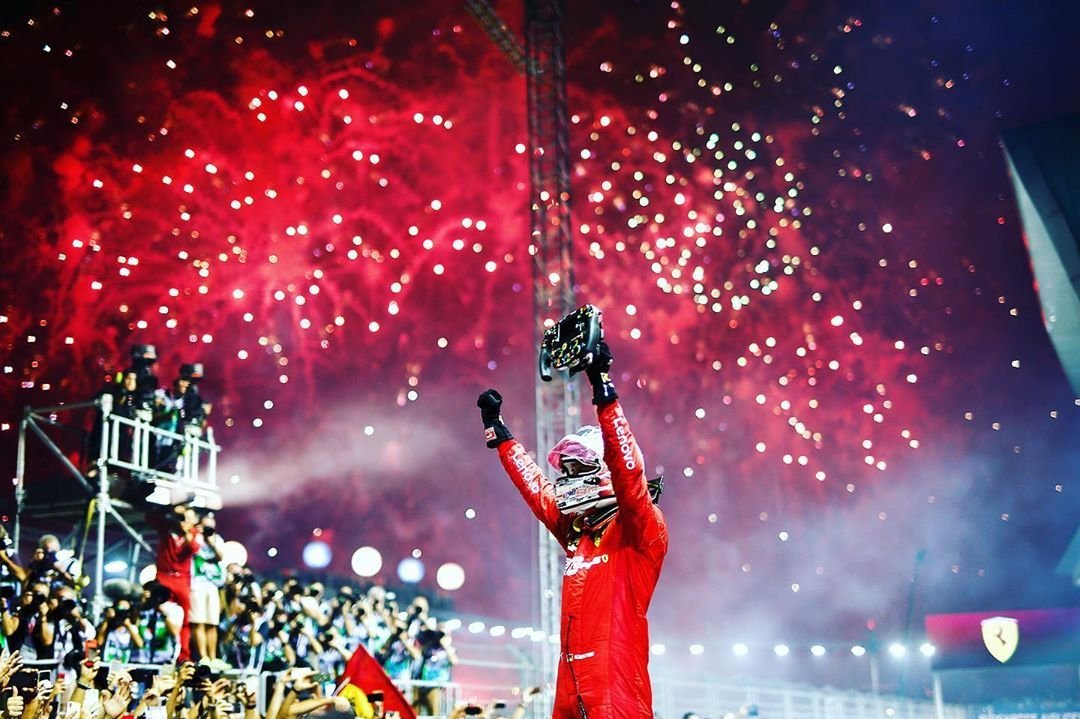 Vettel came agonizingly close to clinching his first Championship with Ferrari in 2018 but his campaign fell apart towards the end of the season.

2019 was a difficult season for the German driver. Vettel had to put up with a younger, much faster teammate in Charles Leclerc while racing in a car that was uncompetitive and unsuited to his driving style. Scoring only a single win, Sebastian ended the season fifth in the Drivers Championship.

The equation between Vettel and teammate Charles Leclerc gave the team enough troubles.

The 2020 season was put on hold due to COVID-19 but Vettel dropped a bombshell regarding his future at Ferrari. Sebastian Vettel officially announced that he and Ferrari would not be renewing their contract for 2021 and beyond. At the end of the  2020 season, Vettel and Ferrari will part ways.

While the season isn’t done yet, Vettel can look back at his time with Ferrari with pride. The German currently sits third in the list of all-time wins for the Scuderia. Only behind F1 legends – Michael Schumacher and Niki Lauda.

So far, Vettel has scored 12 Pole Positions and clinched 14 wins for Ferrari.

Sebastian Vettel prefers keeping his personal life away from all the glitz and glamor of F1. Nobody knows a lot about his private life, but there are a few details.

The 4 times World Champion lives in a medieval-style farmhouse in Thurgau, Switzerland. Vettel isn’t one to splurge on flashy mansions but his house is impressive nonetheless!

While he races some of the fastest cars on track, he prefers two wheels off the track. The German driver has an enviable vintage motorcycle collection and often arrives at circuits on one of his cool bikes. However, he also owns a very cool car collection which funnily enough, includes a Mercedes.

Read: the cars and bikes owned by Sebastian Vettel 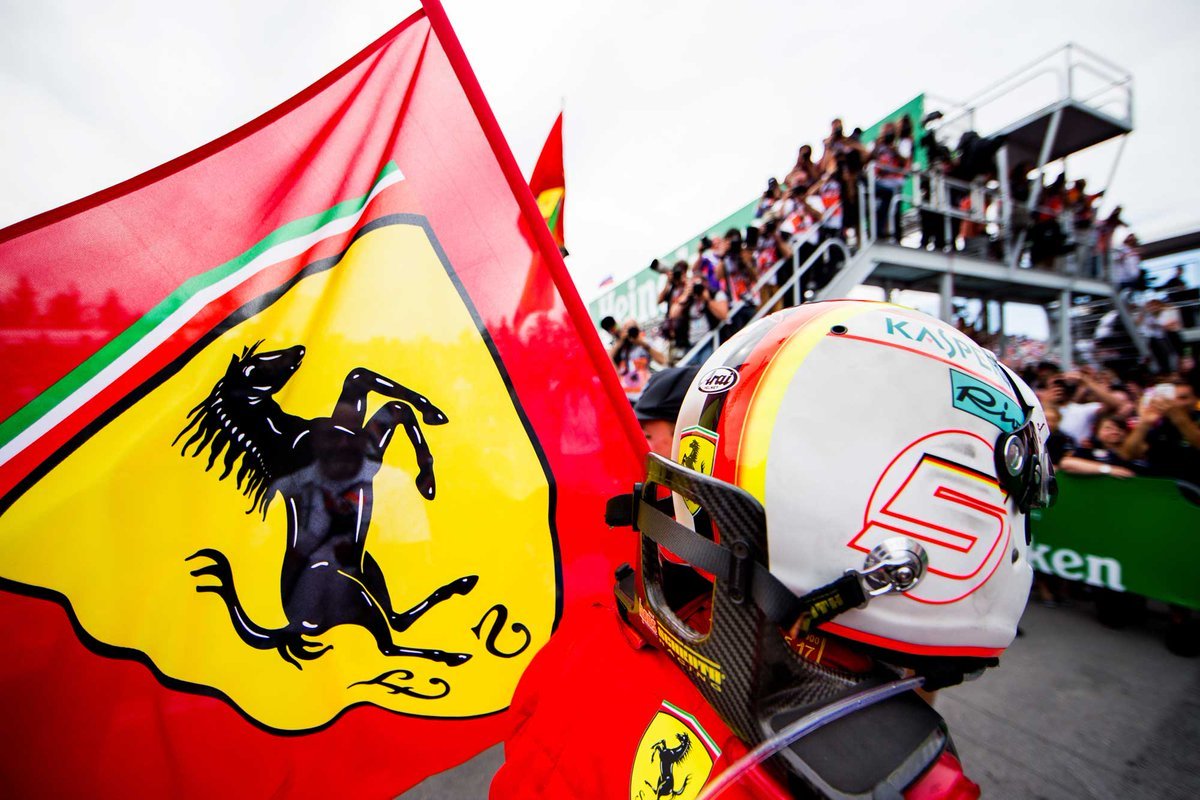 He is endorsed by the likes of watch brand, Casio, car manufacturer Infiniti, car petroleum brand Shell & clothing brand Pepe Jeans. The German driver is reportedly worth $300,000 in endorsements alone.

Sebastian Vettel prefers staying away from the limelight and likes keeping his personal life, well personal!

Vettel is the only driver on the 2020 grid not have a social media account. But don’t get your hopes up because the German’s made it clear that he has no intention of joining Instagram, Twitter, or any other social network.

However, that doesn’t mean Sebastian’s completely disconnected from his fans. On the contrary, Vettel enjoys reading and responding to fan mail and queries.

Those interested can contact Sebastian Vettel either by writing a letter the old fashioned way or emailing Seb. Vettel has his own official website at sebastianvettel.de, which provides details on reaching out to the 4 times World Champion

Or write to him at

Vettel has donated to the ‘Grace P Kelly Association’ – a German organization that aids children affected by cancer.

In early 2019, Vettel teamed up with teammates Charles Leclerc and star footballer Cristiano Ronaldo in a charity football match for the Piedmontese Foundation for Cancer Research and for the Telethon Foundation.

On Sunday, Scuderia Ferrari had a mixed day in the office at Austria. While Charles…

While nobody was expecting any miracles from Ferrari in yesterday’s race, Sebastian Vettel was particularly…

What a cracker of a start we witnessed to the 2020 season! The race was…

Following a difficult race, Sebastian Vettel revealed that he was happy to only spin once…

The 2020 Austrian Grand Prix has gotten off to an exciting start, and it has…

It’s is no secret that Ferrari are light years away from Mercedes at the moment.…

Putting the Misery in Numbers: Here’s How Much Slower Ferrari is Compared to 2019

Ferrari fans would have readied themselves for a long season ahead. The Scuderia team had…

The first-ever qualifying day for Ferrari in the 2020 season, didn’t quite go to plan.…

The qualifying campaign for the season opener in Austria is done! No one might be…

Qualifying for the Austrian Grand Prix is done and dusted. For Scuderia Ferrari, the session…

During the qualifying session of the 2020 Austrian Grand Prix, Alexander Albon created the first…

“Lacking Grip, Downforce and Down the Straight”- Sebastian Vettel Provides an Honest Analysis of Ferrari’s Pace

It seems like ages since Ferrari were investigated by the FIA, over the legality of…

Not a lot has been going right with Ferrari in recent times. It’s been a…

As Sebastian Vettel’s time at Ferrari draws to a close, the German driver can look…

All anybody could talk about yesterday was Sebastian Vettel. The 4 times World Champion made…

Come 2021, Sebastian Vettel will no longer be seen in the scarlet overalls of Scuderia…

The 2020 F1 season is nearly upon us. With a delayed start to the current…

Only 5 days remain for the much-awaited start to the 2020 F1 season. Anticipating a…

Sebastian Vettel is all set to race in his last season for Ferrari. The 4-time…

“Lost a Little Bit of Judgment in Close Combat, But..”- Martin Brundle Expects Sebastian Vettel to “Fly” in 2020

Earlier this year, Sebastian Vettel stunned many when he announced that he is leaving Ferrari…

It’s been a while since we saw any movement in the driver market. Now that…

by Ronan Carvalho
Scroll To Top
PRESS ESC TO CLOSE