Trae Young is an NBA player currently playing for Atlanta Hawks. He was born in Lubbock, Texas, on September 19, 1989. Trae’s parents, Candice and Rayford Young, played professional basketball in Europe. 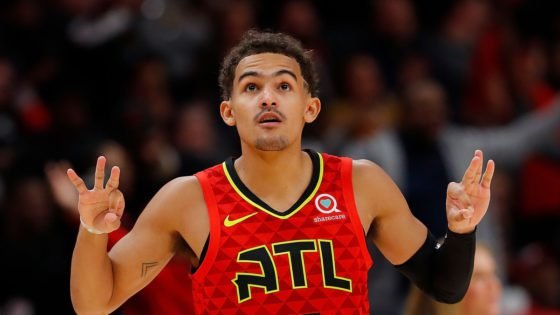 Trae Young started playing high school basketball for Norman North High School in Oklahoma. He then played a year of college basketball at the University of Oklahoma. Moreover, in the 2018 NBA Draft, Dallas Mavericks selected him with the fifth overall pick but exchanged him for the third overall pick, Luka Doncic. Young made it to the All-Rookie first team and was an NBA All-Star by his second season.

Also, Young usually plays at the point guard position and has been using the No 11 jersey.

Young is currently on a rookie-level contract with the Hawks. Moreover, according to Spotrac, his base salary for the 2019/20 season is $6,273,000. IB Times estimated the net worth of Trae Young to be at least $5 million, which they believe will be on the rise.

Young had signed a multi-year endorsement deal with Adidas before coming into the NBA draft in 2018. Young sports Adidas shoes while playing in the NBA.

Young founded the Trae Young foundation in 2019 with an aim to continue education for mental health problems. Moreover, according to their website, the foundation “will inspire and help make a positive impact on all children and adults from all walks of life who suffer from Mental Health problems.”

Recently, Young has helped in clearing medical debts of more than $ million for families in Atlanta. Additionally, Young won the January NBA cares community assist award for his contributions towards charity.

22-year-old Trae Young and the Atlanta Hawks had a disappointing 2019/20 NBA season. They didn’t…

The NBA announced the annual All-NBA teams yesterday. Most of the selections went as expected,…

The Dallas Mavericks came into Game 4 with their main player battling an injury. In…

Atlanta Hawks’ Trae Young is all Rashad Phillips can speak about. He sings high praises…

“Welcome To The League, Rook”: When Kevin Durant Gave Atlanta Hawks Rookie A Taste Of The NBA

In 2018, the Atlanta Hawks drafted their franchise point guard in Trae Young. But their…

When Patrick Mahomes II signed with the Kansas City Chiefs in 2017, little would he…

The Talent of Damian Lillard to The Prowess of Devin Booker: Top 5 NBA Talents Who Are Stuck With The Wrong Team

It has almost been a week since Trae Young left Octagon. After his agent, Omar…

Since Trae Young has come into the NBA in 2018, many have compared him to…

About 80 NBA players connected on a Zoom call on Friday. Their main motive was…

“Time For Us to Finally Make a Difference.” LeBron James and Fellow NBA Stars Launch a Voting Rights Group For African-Americans

After being told to “shut up and dribble” a few years back, LeBron James has…

“All The Black People in New Orleans Support You”: Stephen Jackson Lashes Out At Drew Brees Over His statement

When asked about his opinion on NFL players kneeling during the anthem, New Orleans Saints…

The current situation in the United States of America is not good, to say the…

While Last Dance is coming to an end, Trae Young seems to be writing a…

Let’s just say, the greatest shooter in NBA history, or at least that’s what most…

The NBA season is in limbo due to the Coronavirus pandemic. Fans and players are…

Atlanta Hawks sophomore Trae Young is working hard to make himself a better player. During…

Ronnie Singh, the public face of NBA 2k, made profane comments on DeMarcus Cousins on…

Giannis Antetokounmpo Refuses to Retire, Others Want to Become Gamers After Seeing Life Without NBA

Trae Young: The Superstar the Hawks Have Long Desired

A two-hand jam from Zion Williamson tilted the backboard at the United Center on Friday.…

Trae Young, Karl-Anthony Towns & Others React to Devin Booker Getting an All-Star Snub

by Saketh Kandadai
Scroll To Top
PRESS ESC TO CLOSE