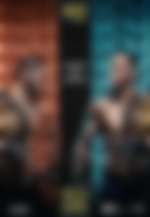 The UFC end their latest leg of events in Abu Dhabi's Yas Fight Island with a mammoth Lightweight Title match. This will see champion Khabib Nurmagomedov defend his title against interim champion Justin Gaethje. The date of the event is October 24th, 2020.

The bouts are scheduled to take place in the standard 30-foot cage. The fights at the UFC APEX in Las Vegas employs a smaller 25-foot octagon. UFC 254 is broken down into the main card, preliminary card, and early preliminary card, hosting a total of 12 fights.

The show is capped off by the pride of Dagestan Khabib Nurmagomedov looking to notch his third title defense against Justin Gaethje. Khabib is going into the fight with no professional losses (29-0), while Justin Gaethje has experienced defeat twice. One of those times was to Dustin Poirier, the man Khabib beat in his last title defense. Michael Chandler will be a backup for the fight and will make his debut in the promotion if he fights.

The co-main event features a high-stakes Middleweight bout between former champion Robert Whittaker and Jared Cannonier. The winner of this fight will most likely be the next contender for Israel Adesanya's Middleweight strap.

Former Lightweight champion Rafael Dos Anjos will be returning to the division against rising contender Islam Makhachev. Walt Harris and Alexander Volkov also face-off in a battle of two Heavyweight contenders, along with female flyweight fighter in Cynthia Calvillo and Lauren Murphy.

Jacob Malkoun is a long-time training partner of former Middleweight Champion Robert Whittaker and will face Phillip Hawes, who is on a four-fight win streak. Malkoun will be making his UFC debut.

Khabib's younger cousin, the undefeated Umar Nurmagomedov will make his promotional debut against Sergey Morozov. Morozov will also be debuting in the promotion.

There are three more fights whose placement on the card hasn't been confirmed. This includes long-time Light Heavyweight Sam Alvey fighting against Da Un Jung. Jung is undefeated in his first three UFC fights.

Invicta Flyweight Grand Prix winner Miranda Maverick also makes her UFC debut against Liana Jojua, who is 2-1 in the UFC.

Three-time Fight of the Night winner Elizeu Zaleski dos Santos will face the undefeated Shavkat Rakhmonov, who is making his UFC debut.

The main card begins at 10:00 pm [October 24] local time in Abu Dhabi and the entire preliminary fight card has a start time of around 6:15 pm Gulf Standard Time. The time has been specifically chosen to be comfortable for Middle Eastern viewers, because of Khabib's popularity.