The tennis world is very well acquainted with  Stefanos Tsitsipas‘ love for vlogging and all the efforts he puts in his YouTube channel. The talented tennis player, Tsitsipas also has an inclination towards the movie-making profession besides his professional sporting career.

Recently, he was in conversation with Barbara Schett aka Babsi from Eurosport. She asked him about his hobbies, and Stefanos revealed his dream to produce a movie. Someday he might accomplish it with his vlogging skills. “It is my dream to make a movie. I don’t necessarily want to be the actor in the movie. I would like to either be the producer or the scriptwriter for the movie. Anything I can do to give it my flavor,” he said.

“It wouldn’t be a horror film” – Stefanos Tsitsipas

The Greek lad is not really interested in horror movies and he doesn’t really like watching them. He doesn’t show any interest in producing them either. Rather he’d invest all his money in some fiction and sci-fi movies. 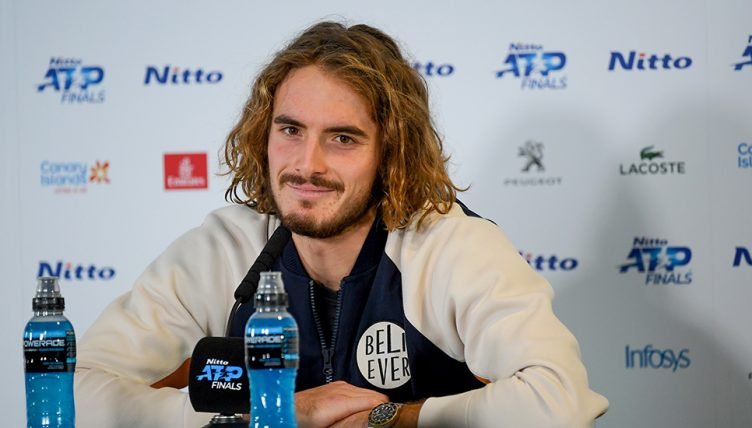 “It wouldn’t be a horror film, I don’t like them. It would either be action/adventure or a documentary covering stories around the world. Maybe fantasies or sci-fi or it could be a lifestyle,” Tsitsipas added.

Babsi continued to ask him, who is his favorite film director. And Tsitsipas seems to be fascinated by the man behind the movies like The Descendants, Tomorrowland, and Gravity, George Clooney.

He feels there are numerous untouched and untold stories in the world. They are ought to be conveyed to the entire world. And the Greek professional thinks movies are the best way to spread the word across the globe.

“I really like George Clooney. I like some of his creations, and he was the producer behind Gravity which I really liked. There are many movies I get to watch and I think I’d like to create something similar. There are so many ideas out there that haven’t been expressed,” he added.

After Stefanos Tsitsipas’ epic victory at ATP Finals 2019, wherein he defeated Dominic Thiem in the marathon finals, he lost to Milos Raonic at the Australian Open 2020. Later, he successfully defended his title in Marseille. And also his finalist position at ATP 500 Dubai.

The Deep Meaning Behind Dominic Thiem Wearing a Bracelet