Darren Till Reveals His Big Plans For UFC 248

The American breeze of tennis Sofia Kenin made her Grand Slam breakthrough in Australia alongside the ‘King of Melbourne’ Novak Djokovic. He’s undefeated in the Melbourne finals and holds an unprecedented record of eight Australian Open titles.

The Serb Djokovic won his first Australian Open title in 2008, after snapping Roger Federer‘s streak of reaching Grand Slam finals. And it’s 2020, the Serb continues to clinch major titles and raise the dominance bar. It’s an opportunity of a lifetime to win a major title with a legendary player of the sport.

Also, winning the Melbourne major with Djokovic is a moment of pride for a WTA player.

Kenin was rooting for Novak in the finals and she was delighted to share the stage with him.  She was desperate to send him felicitation texts upon his win.

“He started following me in Melbourne actually. And we talked a little bit. We had a conversation after we both won. I’m so happy that he won. I remember the finals when he was playing. I was cheering him on because I wanted to have an excuse to message him,” World Number seven Kenin said.

“Just congratulate him and stuff. Yeah, I think it’s great. I’m super excited. Nice pictures me and Djokovic right next to each other with the trophies. It’s good.” she added.

The reigning Australian Open champion Sofia Kenin lost to Elena Rybakina in UAE. It was a (2)6-7, 6-3, 6-3 defeat in the opening round of Dubai Tennis Championships. 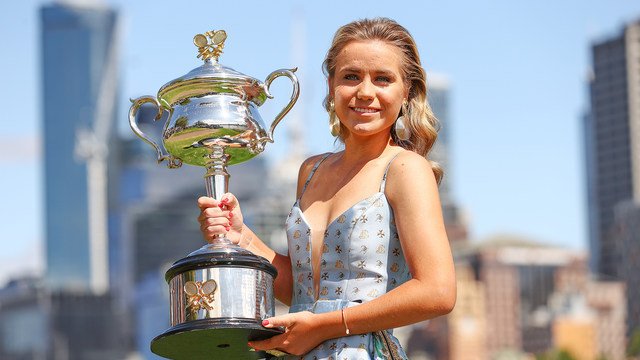 A half dozen double faults in the match disrupted her flow. Kenin was one of the favorites for the title, but the five-seed turned out to be first-round upset. She is also playing doubles alongside Bethanie Mattek-Sands and is through to the pre-quarterfinals in Dubai.

Along with Kenin, the top-seeds Elina Svitolina and Belinda Bencic are out from the tournament. Jennifer Brady thrashed the Ukrainian Svitolina and the defending champion Bencic surrendered to Anastasia Pavlyuchenkova.

The Private Jet of Novak Djokovic – His Luxurious Life