The positives for FC Barcelona in 2015

Barcelona, had a successful end to the 2014-15 season. They beat the Champions of England, France, Germany and Italy on route to win the Champions League. They recovered from an early season off-pace to win the La Liga and won the Copa del Rey in a convincing manner. When they kicked off the 2015-16 season, they won the UEFA Super cup but were hammed in the Spanish Super Cup and have overcome a rocky start to the La Liga season to sit 4 points clear.

What were the positives out of the FC Barcelona, in year of 2015:

Teams love to win trophies. Barcelona have won 4 out of 5 trophies of 2015, with the possibility of adding the FIFA Club World Cup. It would be the 3 time in the last decade that the Catalan giants have won more than 5 trophies in a calendar year.

It’s a feat that only Inter Milan and Bayern Munich have achieved once, in the 21 century. And every team loves to add silverware to its cabinets. The trophies won by the Catalan Giants mean they have now won the most official trophies in the top 5 European Leagues, overtaking arch rivals Real Madrid. That makes it all the more better for FC Barcelona.

The 3 best attackers in the world are currently all plying their trade together with the Catalan Giants. Messi-Neymar-Suarez scored more than 120 goals between them in the 2014/15 season and well over 100 goals in the calendar year of 2015.

Even though Messi got injured for 2 months in 2015, Suarez and Neymar have taken the burden. They are also able to assist each other, making it a very, very hard task for any defence to handle the devastating South American Attack of FC Barcelona.

All of them are likely to continue scoring, especially since Messi and Suarez are in their prime of their careers (its generally accepted athletes are at their prime 27-30), and Neymar fast approaching. Expect the next few Ballon D’ors heading to the Camp Nou for the next few years.

Enrique was the captain of FC Barcelona in his playing days and, like Pep Guardiola has an understanding of the Tiki-Taka football that Barcelona plays. He even managed their second team, FC Barcelona B, he went on to Roma and Getafe before taking reigns at Barcelona, after Tata Martino.

He has modified the tiki-taka that was played, which many teams managed to succesffuly counter over the last couple of seasons. While still maintaining the passing element, there was bit more directness compared to the Pep Era. Barcelona had an ariel set-piece threat, and they were able to break effectively on the counter attack.

If Pep’s Barcelona was built on Xavi-Iniesta and Messi combining the midfield and offence, the Enrique 2015 Barcelona is built solely on the devastating attacking MSN trio.

Xavi and Iniesta who were the heart of the midfield, are now ageing. Xavi left the club at the conclusion of the 2014/15 season. This is where Rakitić has filled the void. While Busquets operates as a defensive midfielder, Ivan Rakitić and Iniesta are able to link the forward lines and defence, and are able to create plays out deep for FC Barcelona. 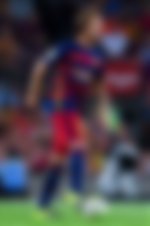 Unlike the Spanish midfield masters, Rakitić is more attacking minded. While capable of creating chances, he is also able provide an alternative avenue on the attack. Capable of drawing out defenders or just scoring in crucial games, he has added a different dimension to the traditional FC Barcelona midfield.

Busquets emerged under the stewardship of Pep Guardiola in his first trophy laden year before cementing himself in the main team by 2009/10. He has been one of the best defensive midfielders and 2014/15 and what’s transpired of the 2015/16 season, has been his best years.

He forms an anchor and additional body in the defence, making vital interceptions and being a tough marker for set-piece defending. And another big positive is the diving seems to have stopped (something he was infamous for). He is now adding a more, physical approach to the game.

While not a big goal scorer, he is able to score in certain crunch matches. Nothing more impressive than the last minute winner against Valencia in the 2014/15 La liga encounter between the two teams, giving the Catalan giants, a full 3 points.