Barcelona FC completed their double treble after winning the Champions League on Sunday with a 3-1 win over the Italian champions, Juventus. But how would you feel if you did not study for your exams but still got full marks? That’s how one of Barcelona’s players, Thomas Vermaelen is feeling at the moment.

The former Arsenal captain joined the Spanish giants last summer for a fee of £15 million but had been, for the entire season, stricken with injuries. Vermaelen has played only 63 minutes for Barcelona against Deportivo de La Coruña in the La Liga. Barcelona have clinched the Liga BBVA, Copa Del Rey and the Champions League titles and it did not take long for the 29-year old Belgian to take what he had won to Twitter. 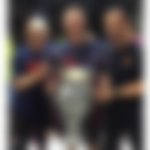 Vermaelen would probably be fit to play next season but it will be unlikely that he would replace Gerard Pique or Javier Mascherano in the starting lineup. Also when asked, Luis Enrique, Barcelona’s manager, replied by saying that Vermaelen will have to fight and earn his place in the starting 11 if he wished to play so.

Also regarding Vermaelen’s transfer, there was an agreement inserted in his contract which states that an additional fee of  £2.9 million had to be paid to Arsenal if Barcelona triumphed over Juventus in the Champions League Final. But it has been recently found out that this deal has been termed as void as Vermaelen has not played even once in this competition this season and hence, Arsenal isn’t entitled to any extra money. It remains to be seen if Vermaelen does get to play more often for Barcelona, but all in all, Thomas Vermaelen is one lucky chap.