However, the show ended painfully as Nick Jonas suffered an accident that needed an ambulance to wheel him away.

During the course of the show, Joe, Kevin and Nick Jonas competed in various events against each other. In addition, they had some athletes from USA’s Olympic contingent train them in the sports they contested.

One of the sports they competed in was BMX. Considered one of the most extreme sports on the road, the Jonas Brothers received training from two-time Olympian Alice Willoughby. Their BMX competition was the last sport of the show. 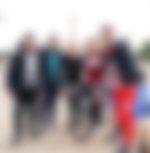 Although Nick felt confident heading into the competition, he lost his balance during the BMX event. This caused him to swerve violently and hit the dirt, taking his brother Joe out in the process. Although Joe escaped relatively unscathed, Nick suffered serious injuries. In addition, Kevin couldn’t avoid the collision ahead of him, which caused him to hit Nick’s bike.

📹 A gif of Nick Jonas falling from his bike and getting a broken rib during the third round of #OlympicDreams.

The Jonas Brothers also competed in hurdles and gymnastics

While the BMX competition rounded off the show, they also competed in track and field events like hurdles. The three brothers received hurdles training from USA Olympians Sydney McLaughlin and Sanya Richards-Ross. While Nick clipped one of the hurdles in the race, Kevin Jonas went on to win the hurdles event.

They also competed in floor gymnastics, where they received training from Olympic gold medalist Laurie Hernandez, and NCAA champions JaNay Honest and Nia Dennis. While all three brothers showed several interesting moves, Nick edged out Kevin by a slim margin.

For every event, they also hosted a mock medal presentation ceremony after its completion. While they may not be athletes, the Jonas Brothers certainly provided the entertainment that would push their fans to cheer for their contingent at the Games.

Couldn’t have done it without these legends, thanks for helping us fulfill our #OlympicDreams! #BeijingOlympics here we come 😉 pic.twitter.com/FQzlBFGofI

After all events, Joe put out a tweet thanking all the athletes who took part in the show. He wrote, “Couldn’t have done it without these legends, thanks for helping us fulfill our #OlympicDreams!”