The greatest players are not those who play top level tennis all the time, but those who somehow find a way to win.

You put the genius under pressure and you are guaranteed something special.

That is what we witnessed this year. 2015 was filled with some of the best tennis matches. Following are the top 7 comebacks at the highest echelons of tennis, that is, the Grand Slams.

Last year’s runner up, Nishikori, faced a shock first round exit at this year’s U.S. Open as he was ousted by Paire in a scintillating first round encounter. The Frenchman was down 2 sets to one before he pulled out his A game to knock out the number 4 seed in less than 3.5 hours. Paire went into the match with an all-or-nothing mentality as he fired 64 winners for 67 unforced errors. 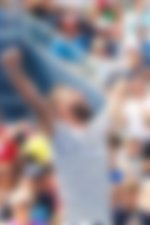 Paire after the match:

“To beat Nishikori, it was impossible for me to imagine.”

The upcoming Australian star Kokkinakis took out the number 11 seed Gulbis at the Melbourne Park. The teenager showed great character to hold on to six deuces and see off four match points in the fourth set. The match was on. In fifth set both players held their serve with Thanasi leading 7-6 as Gulbis double faulted and handed over match point to the Australian. Thanasi seized the opportunity to win the match.

Playing at Wimbledon is always special, but playing at your last Wimbledon is something inexplicable. This is what Lleyton experienced this year. The Aussie who is always known for his incredible fighting spirirt, did not go out easily. It was a fight till the last point as Jarkko edged the deciding set 11-9. An emotional Lleyton bid farwell to the All England Club where he won the title back in 2002.

In one of the best matches of the year, the Frenchman beat the French Open champion coming back from down 2 sets to 1 at Wimbledon. The final set was filled with drama and tension as the spectators got fully engrossed into the match, cheering at every point as if it were the match point. A couple of errors from Stan provided a glimpse of victory for Richard as he leaped onto it to record an amazing comeback win.

In an all Australian battle, it was more than just a battle of tennis players. It was a battle for pride. The younger one prevailed as he produced an incredible comeback from 2 sets down at the French Open. Thanasi suffered a stomach and hip injury as well in the fourth set and was down 3 match points before he showcased great mental resolve to bag the fourth and fifth set.

Kyrigos became the first Aussie in 10 years to reach the quarter finals of the Australian Open as he saved a match point to beat Andreas Seppi. He had the following to say after the match :

“When I saw I had finally won the match it was incredible. It was the best feeling I ever had, it’s crazy. I don’t think it’s sunk in yet.”

In his match-up against Nadal at the U.S. open, ‘Fab Fog’ did something that had never been done before. He became the first player to beat Nadal after being two sets to love down in a Grand Slam match. Nadal was a perfect 151-0 in this record before Fognini spoiled the party. Fognini fired 70 winners to win the match and stun the tennis world.

Nadal had the following to say about Fognini after the match:

“He played great, it was not a match that I lost, even if I had opportunities. It’s a match that he won. So accept. I’m not happy that he played better than me, but that’s what happened.”

I am pursuing B.Tech in Computer Science and Engineering from Maharaja Agrasen Institute of Technology( MAIT), IPU. Tennis is the most important part of my life and I love it more than anything else.
ARTICLES BY AUTHOR